Oakland, Calif.—At around 11:30 PM on Dec. 2, a fire tore through the Ghost Ship warehouse collective in the Fruitvale district here, killing 36 people. Almost everyone who is part of the music scene here knew people who died, and it has been a terrible shock. 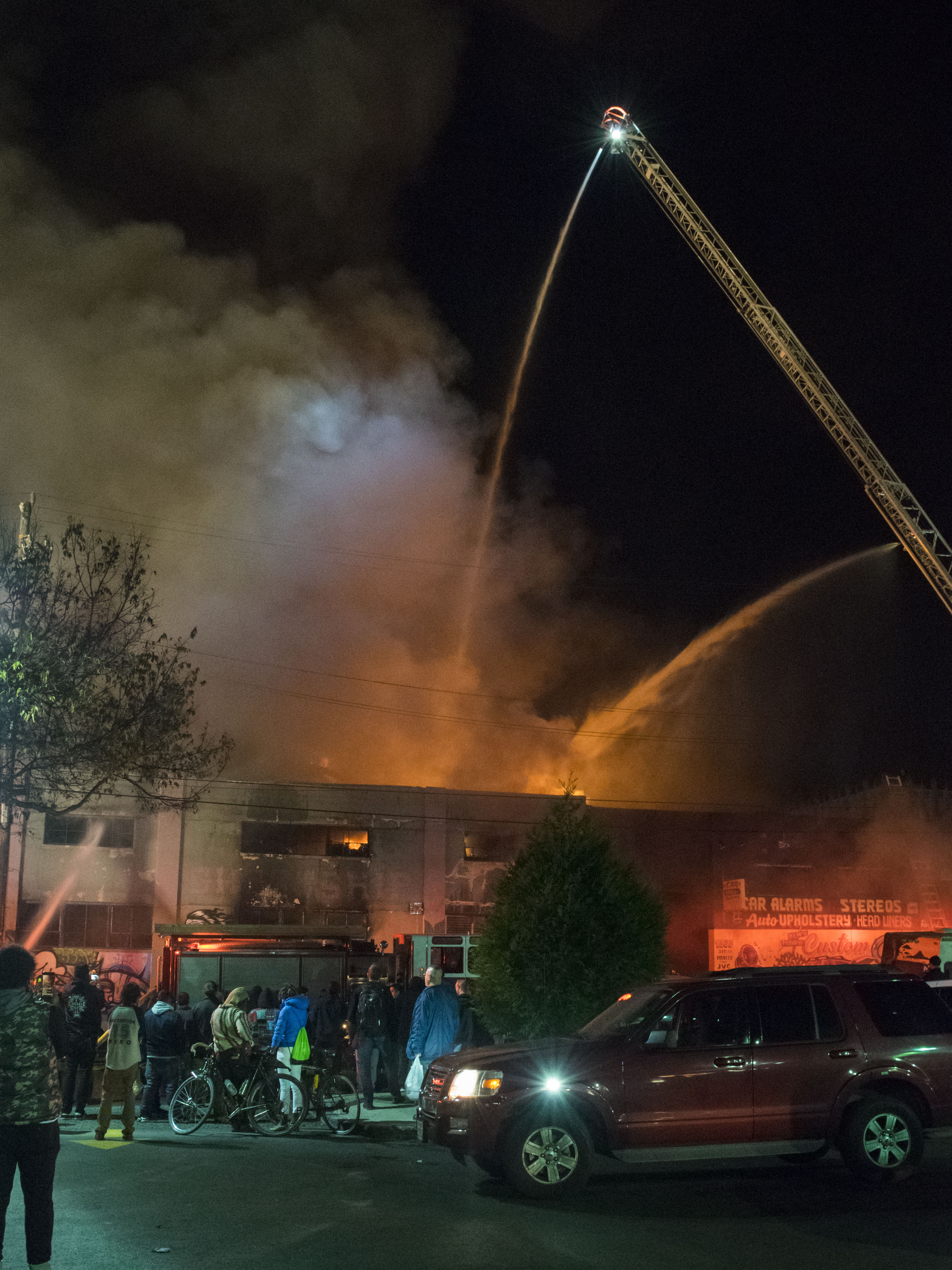 The warehouse known as the Ghost Ship, burning on Dec. 2, 2016. Photo: Wikipedia.

Within a day, the blame game began, focused on the leaseholder and building’s owner who may face criminal charges. But there is more to the story. The Oakland Fire Department had no records of the building, nor of any inspections for over 30 years. City inspectors failed to follow up on complaints. Child Protective Services knew about safety problems but, trying to protect themselves legally, failed to share that information with the city government.

The Ghost Ship was a rare place where LGBTQ people and youth of all colors and backgrounds could have a good time and work on art and music. It was especially important to Transgender people.

Today young people are faced with massive unemployment, dead-end jobs, a severe housing shortage, poor access to continuing education, and a difficult art scene where their music is often excluded from the mass media and their artwork ignored. The legendary art and music scene has mostly been driven out of San Francisco. The few places left are being taken away.

The divide here between those who pander to the wealthy and the government for funding and those who take an independent stance includes the art community. Former industrial areas are a reminder to the wealthy of their crime of deindustrialization and are viewed as blighted. To the independent artists and musicians, they are among the few remaining places that are full of freedom and possibility.

Youth who are trying to find a space to live take an active approach to life and to other people, but are seen as unproductive by capitalism. That is a profound inversion of reality. Though the masters may have power over the slaves, the slaves who do the work that make things happen.

Those who died in the Ghost Ship fire created beautiful and iconoclastic work. In the meaning of their life activity and their sense of collectivity, one could see their quest for universality, which gives us a glimpse of what a truly human society might be like. We think of them and honor their memory as we continue the work for a new, truly human world.

← Voices From the Inside Out: Castro absolved?
Oakland, Detroit march on Martin Luther King Day →
This work is licensed under a Creative Commons Attribution-ShareAlike 4.0 International License