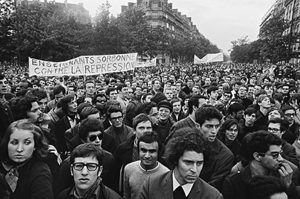 Protesters march down Boulevard Saint Michel on May 10, 1968. Their banner reads: “Sorbonne Teachers Against Repression.” photo by: Serge Hambourg.

For me as an observer-participant, the general strike of ten million workers and students in France in 1968 was an exhilarating experience.* (For a Marxist-Humanist analysis see: my in-person report “Massive Revolt of Workers and Students Is Real Spirit of France,” June-July 1968 News & Letters, as well as my youth report, “France, Spring 1968—Masses in Motion, Ideas in Free Flow,” The Raya Dunayevskaya Collection, #3926, www.rayadunayevskaya.org.) Being in Paris was being in a whirlwind. How quickly, and with such power, a movement from below can emerge and take action. In days, forces that supposedly had “nothing in common,” students at the elite Sorbonne and workers at the Sud-Aviation aircraft factory, found common ground, interchanged experiences and ideas, visited each other in factory and university, stormed the streets together—ten million strong, demanding to be rid of Charles de Gaulle, reaching for a new beginning. It was a singular, magnificent moment, and yet, it fell short of becoming an uprooting social transformation. It was a near revolution that never became a full one.** (See also: “The French Revolt and Its Analysts” in The Missing Link, Perspectives Report to the News and Letters Convention, 1968, The Raya Dunayevskaya Collection, #4123. France, May 1968 in Philosophy and Revolution, pgs. 273-275.)

WHAT DOES FRANCE 1968 MEAN NOW

Can that near revolution help today’s social movements transcend the present moment? Just as a half-century ago in France 1968, we are experiencing important new beginnings emerging in response to the many contradictions of capitalist society: Black Lives Matter, massive marches and the #MeToo movement as new expressions of Women’s Liberation, a movement emerging from high school students with the March for Our Lives against the madness of gun violence, as well as inklings of a new labor militancy in recent teacher walkouts. 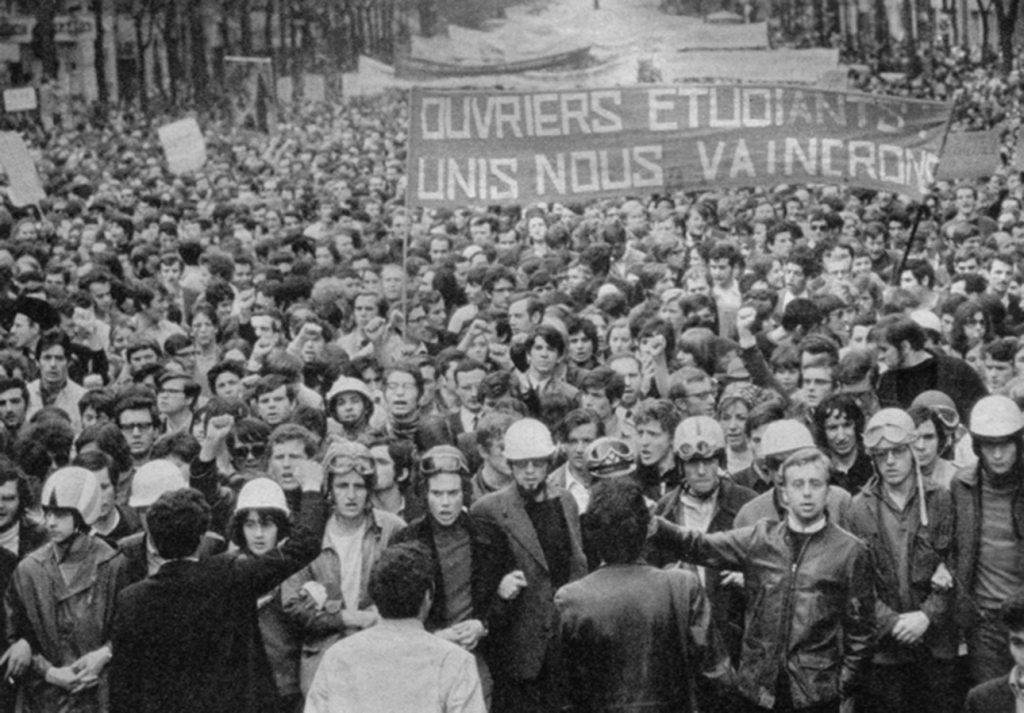 France1968 students and workers march through the streets of Paris.

I wonder whether the “experience of 1968”—its power and creativity from below but as well its incompleteness and ultimate failure to transform French society—might have something to say to the possibilities and difficulties we are facing today in our efforts to uproot the old and reach toward an emancipatory future?

When we look at France 1968 there is no doubt about it being a high point of the 1960s. I wrote then of the vast outpouring of the “Committees of Action” primarily created by groups of students to work at universities, visit the factories, assist workers in writing leaflets, bring together students and workers for discussions and actions: “It is especially the Committees of Action which are the form of the French Revolt. Not a single party or a single action, but a multiplicity of actions, thoughts, ideas. To the extent that the Committees of Action represent the self-development and self-determination of the millions of French workers and students, women and men, to that extent are we on the way to a new France.”

DUALITIES IN THE MOVEMENT

And yet at the same time, there was a duality in France 1968—for in the end de Gaulle remained in power without needing to fire a shot. The duality had a number of aspects. First was the counter-revolutionary actions and power of the Communist Party, which had a dominant role in the main trade union, the CGT. They worked day and night to limit the contact between students and workers, to hem in the revolt, seeking to turn it into merely a question of reforms.

Workers resisted, turning down an agreement that the CGT engineered with the government, but there was no doubt that the Communists were intent on stopping the possibility of a full revolution, one that they could not control. De Gaulle appreciated their efforts to limit the power of a movement, even as he appealed to the fascist right to come to his aid.

The duality of France 1968, however, was not alone the actions of the Communists. A second aspect was the illusions that other revolutionaries, particularly the Trotskyists of that day, had about the Communists. They fought and criticized the Communists, but refused to recognize the class nature of this so-called Communism that was in fact a form of capitalism, state-capitalism, that had arisen with the transformation of Russia from a workers’ state with Stalin’s consolidation of power. (For a discussion of Trotskyism’s role in France 1968, see Dunayevskaya’s “Who Arrested the French Revolution,” June-July 1968 N&L.)

Even those who did not have any illusions about the Communists, such as the revolutionary student leader Daniel Cohn-Bendit, contributed to the duality by his view that it is “the act” which is key, and any theory needed could be picked up “en route.”

In France, as in many other revolutionary moments in history, there was a failure, before and during the revolt, to see philosophic preparation for revolution and its concretization within the ongoing struggle as the crucial challenge. It was “the missing link.” Neither “the correct vanguard party line” nor “the revolutionary act,” no matter how profound, can substitute for it. If there is not an active seeking out of the unity of practice and theory, a realization that the act alone will not suffice, we end up in incomplete, failed, and transformed-into-opposite revolutions.

Marxism—that is, Marx’s Marxism, his revolutionary humanism, his uniting Reason and Revolution—was the missing link within the events of France 1968. It was at the heart of the duality that made France 1968 a missed revolutionary moment, and not a new society.

The missed moment of France 1968 is not merely an historical footnote. It is the living challenge/task that remains for us today. Look at the crucial moments that have been arising here and now:

♦ The hundreds of thousands who joined the women’s marches in opposition to Trump and on March 8, and the #MeToo movement which is about women’s experiences in all walks of life.
♦ The Black Lives Matter coalition that shows how pervasive is the racism which the Civil Rights Movement was not able to fully eradicate, also reveals that Black masses’ humanity is forever putting American civilization on trial.
♦ The massive reaction of high school youth with the March for Our Lives against the madness of U.S. gun violence showing the possibilities of a different future.

Each of these movements has been feeding and watering the others. And perhaps the teachers’ strikes are an intimation of something new for labor.

Of course we are not yet at the level of a decisive moment like France 1968, where “tout est possible” (all is possible). But that is where all the difficulties came forth. Today’s new generation of rebels can make a leap forward that France could not. “All is possible” was an important and exciting moment. But it is only the opening of a door. What will be necessary to march through, to transform the possible to the actual of a new society and not a return to the old as in De Gaulle’s France?

If we have all this creativity from below what else is needed? What can give action a revolutionary direction? Certainly it is not the vanguard party! Yet organization is needed. But any revolutionary organization must be based on the organization of thought—that is, revolutionary philosophy. That is what allows the possible to become the actual of revolution in permanence. If not, the void in thought will be filled with the continuing actual of the class-based, sexist and racist society that we and the entire world live under.

← SF walk against rape
III. The reality and the myth of contemporary capitalism →
This work is licensed under a Creative Commons Attribution-ShareAlike 4.0 International License