Los Angeles—As of press time, the most destructive wildfire in California history is still burning near Chico, Calif., north of Sacramento. Eighty-five people have died and 249 more are missing in what has been named the Camp Fire after the creek near where it is believed to have started. More than 18,000 homes and buildings have burned down, meaning this single fire so far has caused more property destruction than all 2017 wildfires combined, which in turn was more than the whole previous nine years. 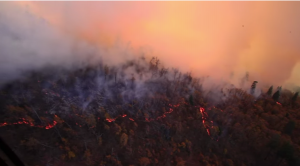 The smaller but still widespread Woolsey Fire in northwest Los Angeles County has killed three, and 500 buildings were destroyed by quickly moving flames fueled by strong southerly winds. In this region where insurance underwriters of secluded mansions have been known to employ private firefighting personnel to prevent losses in expensive real estate, the coastal suburb of Malibu featured a town hall where some criticized public fire officials for not doing enough to save structures. A deputy fire chief explained that the unprecedented speed of this particular fire necessitated that all resources go to lifesaving: “Our firefighters were out there putting their life on the line to protect you and the communities” (KTLA).

Touring the wreckage of the fires, U.S. Secretary of the Interior Ryan Zinke barely squeaked out an admission that climate change played a role: “the seasons have gotten longer, the temps are hotter” (San Francisco Chronicle). Indeed, the summer of 2018 was the warmest on record in California, and a Chico firefighter interviewed by the BBC said it used to be unheard of that firefighters would be working through Christmas, and yet, for the last two years, they have. As climate change brings higher average temperatures, there is potential for more and larger fires in the future.

The Interior Secretary claimed that to mitigate fires, forests should be thinned out, presumably by logging, a conjecture that was also put forward during the George W. Bush administration. Putting aside a major climate impact inherent in logging—trees consume CO2 from the air in the process of photosynthesis—Zinke is on shaky ground. Matthew Hurteau, a scholar of forests at the University of New Mexico, told Vox that underbrush buildup from overzealous fire suppression in developed areas might be the bigger culprit: “We have suppressed fires for decades actively. That’s caused larger fires.”

However, the tree-thinning theory was echoed by Trump, who tweeted that federal dollars might be withheld 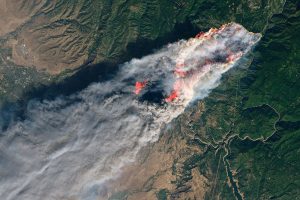 from the state if “gross mismanagement” of the forests continued. It was later pointed out to him that almost all primitive wilderness in the U.S. is federally administered. (On Nov. 16, the House of Representatives took Trump’s doublespeak and ran with it, passing another Bush-era agenda item and calling it the “Gray Wolf Management Act,” which removes gray wolves from the Endangered Species list, freeing up corporations to encroach on their habitat.)

The majority of Californians are dependent on a private monopoly electricity provider, PG&E. In a required routine data filing on Nov. 13, the company revealed an outage reported in the Camp Creek area just before the Camp Fire ignited, fueling speculation that the energy behemoth may be responsible. In 2017, state officials had determined that failing equipment owned by PG&E caused 17 wildfires. This was one of the worst findings for PG&E since an improperly installed natural gas pipeline under a San Francisco suburb exploded in 2010.

The prospect of liability for the Camp Fire sent PG&E stock plunging until the president of the California Public Utility Commission announced that the state would offer the company access to bonds to cover their liabilities, which could then be repaid via future surcharges on consumers: “It’s not good policy to have utilities unable to finance the services and infrastructure the state of California needs” (CNN).

He neglected to explain why the state wouldn’t be better off building the infrastructure directly, or why PG&E shareholders’ demands for ever-increasing profits prevented the company from making more investments in safer equipment and staffing levels that might have prevented such massive death and destruction.