Within the climate justice movement there is a growing realization that capitalism is a big, even fundamental, part of the problem. This is a crucial point that demands that we grasp what is essential to capitalism and what kind of new society can transcend it. That also requires coming to grips with the experience that countries that claimed to be socialist, like the USSR and China, were oppressive and ecologically destructive.

The very nature of capitalism—a system of spiraling accumulation of capital and production for production’s sake—has blocked real action on the climate and the mass extinction crisis again and again. This has been manifested in a number of interlinked ways—all of them exacerbated by the systemic crisis world capitalism plunged into in the mid-1970s, which has strongly shaped events since then.

Some of those ways include:

The influence of the right wing comes from both ideology and the political might flowing from economic power. The ideology flows not only from the economic inequality but from the alienation inherent in capitalism, in which the machine and the economy are masters of humanity and not the other way around.

DEADLY IDEOLOGY OF NO ALTERNATIVE

It is not only the particular ideology of the Right that poses a barrier to confronting the climate crisis. It is the general ideology that flows from the nature of capitalist society, compounded by the failures and transformation into opposite of so many revolutions and socialist movements.

The USSR was ecologically destructive, despite currents in the Russian Revolution that moved in an opposite direction, precisely because it was transformed into a state-capitalist society under Stalin. We cannot allow that kind of transformation again, not only because it reinforces the assumption that capitalism is our only choice.

Today we face widespread hopelessness, which is not helped by the reticence of scientists and the denialism of economists and other ideologues. None of this can be separated from the underlying toxic ideology that there is no alternative. A popular saying is that it is easier to imagine the end of the world than the end of capitalism.

Capitalism’s abject failure to confront climate change makes urgent the sense that another world is possible. A world where workers’ control of production halts the built-in destructive direction of capitalism—and overthrows its seemingly unbreakable law of value—can in fact be built by transformative movements from below. Now we see only the tip of that transformative iceberg but its potential to erupt is fermenting. Just look at the youth climate strikes that are sweeping the globe, with another week of international strike events planned for Sept. 20-27.

How can we make “another world is possible” real? The inevitable eruptions from below are a tremendous beginning in both activity and thought, yet they demand more than just support. They demand a unity of theory and practice so that revolt does not spend itself in activism alone. They need to be in unity with a philosophy of revolution that can set afoot a whole new society with a new direction away from the self-destruction of humanity and toward total liberation.

WHAT KIND OF SOCIALISM IS NEEDED? 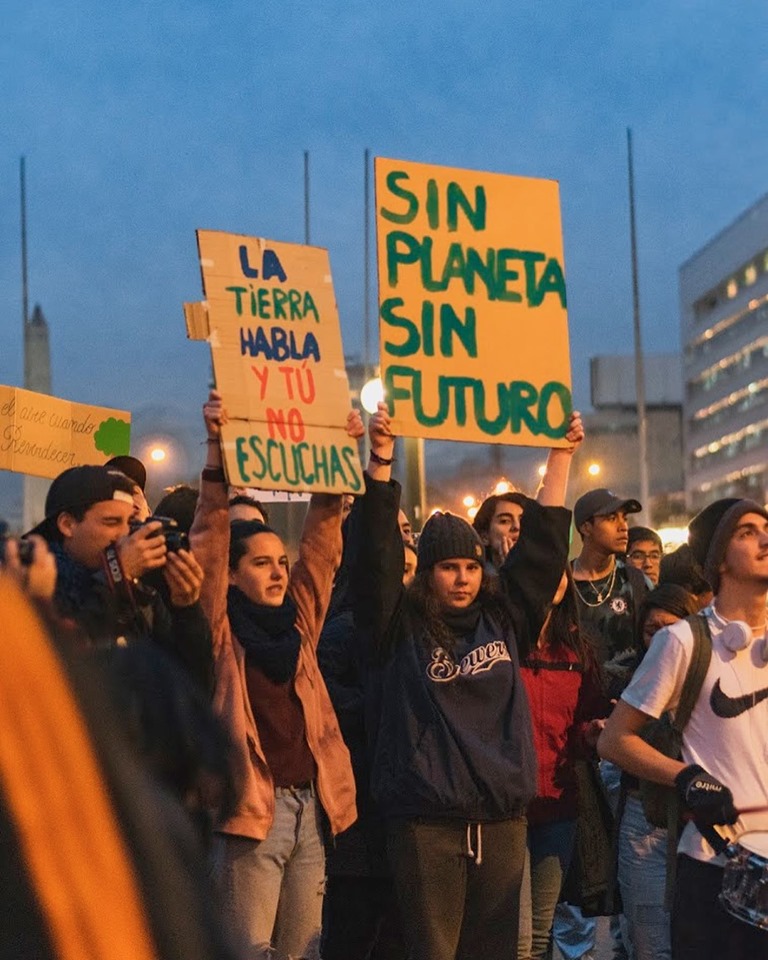 What kind of socialism could set that new direction? Clearly, it must be based on the self-activity of the individuals, internationally, including the youth, Indigenous peoples, workers, Black masses and other people of color, women, LGBTQ people, people with disabilities. And that can happen only on the basis of a revolutionary change in which that self-activity is the driving force, and in its very nature drives to break down the division between mental and manual labor. Only that can halt the direction toward ever more accumulation of capital, ever more alienation, ever more destruction of the environment and people, and endless manipulation of policies and misinformation by vested interests.

The history of so-called Communist, socialist or social-democratic states shows clearly that this cannot be accomplished by means of market strategies, state planning, or nationalization, including “public ownership” or “democratic control” of corporations.

There is scope within the existing system to shift toward renewable energy and environmentally sound land use and away from greenhouse gas emissions. And those kinds of steps are urgent and necessary. But none of that can reverse the fundamental direction of capitalism’s production for production’s sake.

Let’s dig into this more by looking at Karl Marx’s analysis, as comprehended by Marxist-Humanism. (See the analysis in Parts III and V of Marxism and Freedom by Raya Dunayevskaya.) The character of the labor process is crucial. In the capitalist factory, the machine dominates the worker, and the worker acts as an appendage to the mechanism. Marx calls it the dialectical inversion of subject and object, where the object dominates the subject.

This dialectical inversion is inscribed in a hidden form in the phenomenon of value. We are not talking about value in a moral or psychological sense but in the capitalist economic sense. Under capitalism, the driving motive of decisions about production, its speed, its technology, even its location, is maximizing production of value—or, to be more precise, maximizing the procurement of surplus value.

Marx shows that, under the capitalist mode of production, value is actually congealed, objectified labor. It is the objectification of alienated abstract labor, pounded down to one quantitative dimension of socially necessary labor time, and abstracted from all other aspects, including material aspects. It is not a theoretical construct but rather the actual basis of capitalism’s functioning. Value takes on a life of its own as the driving force of society and stands in opposition to workers, the subjects of labor.

Industry’s output of waste, including greenhouse gases, is determined by its process of production, where the needs of the subject, the worker, are subsumed by the drive of value to expand itself. The trajectory of this historical period is determined, not by humanity’s growing productive powers as such, but rather by human power in an alienated form that stifles human development as much as it creates the potential for development by expanding productivity.

The “Communist” USSR of the past, and China even today, have had some of the worst environmental records and by no accident subordinated themselves to the law of value.

Social-democratic Norway has long been a major oil exporter, while all of Europe, like the U.S., has obscured its climate footprint by transferring so much of its heavy industry to Asia. The “21st-century socialism” of Venezuela, Bolivia, and Ecuador tried to find a new path; however, their governments never turned away from reliance on extraction and export of fossil fuels as a path to capitalist development, which they substitute for real human development.

The fact that these countries, especially the USSR, were passed off and widely accepted as “socialist” economies led to serious illusions and deformations of theory. Green theory in general proceeds from the assumption that socialism is just as guilty as capitalism and therefore the blame lies with “human nature” or “industrial civilization” abstracted from the social relations of production. This kind of theory abstracts from the counter-revolution that came from within the revolution, and its transformation into opposite, into state-capitalism.

Paradoxically, this abstract reaction against the destructive effects of out-of-control human power would only doom us to be unable to halt that destructive trajectory. That is because the only way to take control of the consequences of human production is to wrest it from its subordination to the drive of value to reproduce itself in the rampage of production for production’s sake. That can only be accomplished by the most daring and thorough act of social revolution and abolition of capital.

In this society, we do not freely control our actions, and renouncing the expansiveness of human power in its unalienated development would block the way for achieving such self-determination. So we need to recapture Marx’s philosophy of revolution with its focus on freedom as the opposite of today’s social reality.

Crucially, as Raya Dunayevskaya pointed out, Marx had “…a conception of a new society based on expanding human forces, during a century in which the whole cultivated world thought of expanding material forces as the condition, activity, and purpose of all liberation” (Philosophy and Revolution, p. 65).

What is needed today is that kind of commitment to building a new society through creative human forces of the masses in motion. When it comes to the working classes, small-scale peasant farmers, Indigenous people and the youth, who are the majority of the world’s population, that commitment must include elicitation from and listening to them, not just selling them a green agenda. The movement needs activity in both theory and practice that recognizes the movement from practice that is itself a form of theory and that has the vision of a totally new human society in view at all times.

The fact is that the normal functioning of capitalism involves what its ideologues call “creative destruction,” or today’s self-promoting Silicon Valley moguls call “disruption.” Jobs are destroyed as a matter of course; whole industries and communities, even regions, are devastated.

Scapegoats are targeted: immigrants, other countries, unions, environmentalists. But that is how capitalism normally works. If we allow it, its destructiveness will be turned, not against capitalism, but against those who aim to overcome it, against those who raise the question of what kind of labor human beings should do.

LABOR AND THE NEW SOCIETY

There is no path to a new society or away from climate chaos as long as countering climate change is planned at the expense of working people, such as through taxes on consumption, instead of posing the liberation of working people from capitalist exploitation and the release of full human development as the way to break the anti-environmental direction of modern society. And more than “not at the expense” of workers but with workers as thinking and acting subjects of revolt, with the full recognition of the movement from practice that is itself a form of theory and on that basis a totally new relationship of theory and practice.

Nothing less can solve the problem, and nothing less should satisfy us. We need a vision of liberation and climate justice that grasps human development and real unalienated wealth as the absolute opposite of the inhuman law of motion of capitalist accumulation.

“[In] the modern world…production appears as the aim of humanity and wealth as the aim of production. In fact, however, when the limited bourgeois form is stripped away, what is wealth other than the universality of individual needs, capacities, pleasures, productive forces, etc., created through universal exchange?…the development of all human powers as such the end in itself, not as measured on a predetermined yardstick?….[Where the human being] Strives not to remain something he has become, but is in the absolute movement of becoming?”

← From the writings of Raya Dunayevskaya: Permanent revolution and the dialectic
Women worldwide, September-October 2019 →
This work is licensed under a Creative Commons Attribution-ShareAlike 4.0 International License