The number of strikers alone was an indicator of the restructuring that GM had carried out, even since the brief strike of 2007 when 73,000 auto workers went out, or the 1970 strike when 400,000 GM workers maintained a bitter strike for 67 days.

Despite their diminished numbers, striking GM auto workers—in the tradition of railroad workers, coal miners and steelworkers—still command the spotlight as a critical front facing U.S. capitalism. They join workers in the vanguard of the labor movements on other fronts. Low-wage workers have continued the Fight for $15. The teachers’ strike in Chicago, overlapping the duration of the UAW strike and including daily rallies and marches of thousands, has demanded improved wages and working conditions from the unelected School Board controlled by “progressive” Mayor Lori Lightfoot. Teachers also demand reasonable class sizes for their students and affordable housing for school workers required to live in Chicago. (See “Chicago teachers strike,” N&L November-December 2019, p. 3.) Their action follows the general strikes of teachers in West Virginia, Arizona and Oklahoma, which in turn took inspiration from the Chicago Teachers Union strike in 2012.

Workers from plants that GM had closed made clear on the picket lines that their number one issue was restoring jobs at their home plants. Those who were still working had been transferred, commuting hundreds of miles in some cases.

PATH OF DESTRUCTION IN THE DRIVE FOR PROFIT 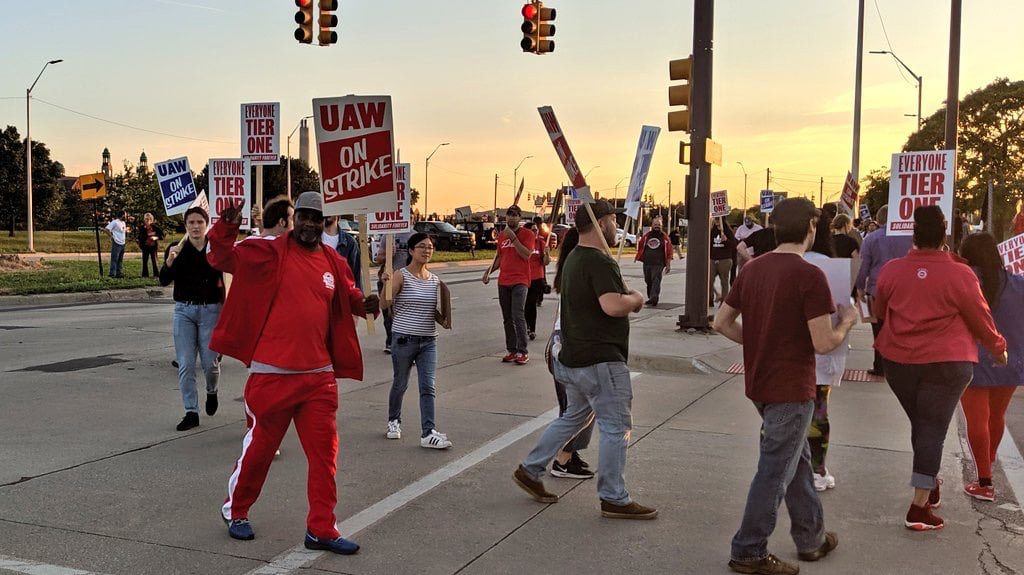 Some of the thousands of UAW workers who, on Oct. 11, 2019, marched the picket lines on strike against General Motors. Photo: UAW.

GM was holding closed factories hostage going into negotiations. GM closed down four plants, forcing workers to bargain just to regain the previous status quo. GM shut the Lordstown, Ohio, plant—a site of historic resistance in the 1970s. GM had opened the plant far from any city in the expectation that the workforce, including veterans hired just back from Vietnam, would be less rebellious than at plants in Detroit where Black caucuses and rank-and-file caucuses confronted the Big 3 automakers.

They also shuttered the Warren, Michigan, Transmission Plant and the White Marsh plant near Baltimore, built in 2000, as well as the Detroit-Hamtramck Assembly Plant. That plant had opened in 1985 with so much robot technology that just 3,000 workers assembled the Cadillacs that 16,500 workers had been doing before. GM profited off the four million vehicles that workers had built there for more than 30 years, yet they slated it for permanent closure.

In the end, the Detroit-Hamtramck Plant was the bone that GM tossed to UAW negotiators, agreeing to invest $3 billion to build electric trucks there with the promise of restoring 2,200 jobs. The price for the reopening of Detroit-Hamtramck was the union’s endorsement of shutdowns at the three other sites.

The capitalization at the Detroit-Hamtramck Plant would be well over one million dollars per worker. At the time of the 1970 strike, when 400,000 auto workers went out for 67 days, GM’s system-wide capitalization was around $45,000 per worker. Even in the 1970s, capitalism’s mass of profits could not protect it from a crisis in 1974-75 caused by, as Karl Marx had foreseen, the declining rate of profit—the result of the need to extract ever more surplus value from fewer workers as dead labor (capital) increases. GM has forced workers to pay for this decline in the rate of profit at the point of production, whether in U.S. plants or in Mexico or China.

One worker after another on the picket line said the key reason they were enthusiastically staying out was to fix the two-tier, three-tier, four-tier system where one worker could be doing the same job as a worker making half as much, and lacking benefits. After Ronald Reagan fired air traffic controllers in 1981, corporations reacted to that war on labor and to his encouragement of scabs as replacement workers, by demanding giveback contracts.

They forced two-tier wage and benefits systems on many industries. Two-tier plagued workers for years until union workers could undo most of the evil effects. But then UAW misleaders responded to GM’s threats of bankruptcy in 2007 by agreeing to a new two-tier system, establishing a gulf between veteran workers and new permanent workers hired after 2007. This forced the new-hires to work eight years to get parity on wages with existing workers, and denied them pensions.

GM’s threat to go bankrupt was real—only the $32 billion federal bailouts in 2008 and 2009 restored them to solvency. But despite the bailouts, and despite the obscenely large profits at GM now, the split between permanent workers remains. What makes it far worse is the company’s increasing use of temporary workers. Temp workers begin at half pay and without healthcare or other benefits, not to mention the widespread employment of subcontractors within the factory under yet other conditions.

The new contract does not dismantle that system; it chips away at the damaging divisions by shortening the time to four years for second-tier workers before they will receive the full wage and offering a path for workers, laboring for years as temps, to finally become permanent. But it does not restore what any union representing its workers should fight for: equal treatment for all union brothers and sisters. What will stop GM now from hiring even more temps, even with the antagonism of the rank and file, and what will the provision of giving the union a voice in hiring temps mean beyond legitimizing the temp’s second-class status? 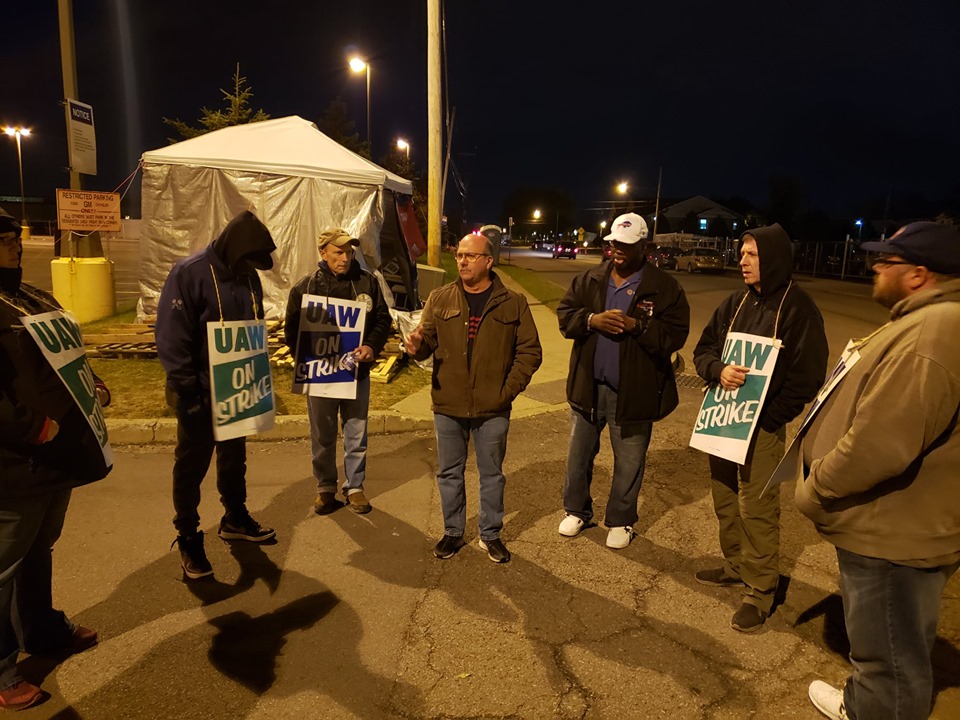 Commentators included as “wins” for workers issues where they did not lose further ground. The contract kept workers’ contribution to healthcare at 3%. At the beginning of negotiations GM had demanded that workers pay more for their healthcare than the current 3% of wages. In the 2007 contract GM had established a separate fund for healthcare and benefit obligations that would be administered by the UAW. Petroleum companies accepting billions in annual subsidies from the U.S. Treasury and auto companies forcing bailouts have been skilled at supping at the public trough. Now workers rebel at getting a few crumbs while the bailed out companies are rolling in profits. Universal healthcare would sharply lower GM’s labor costs and increase the surplus value it squeezes out of its workers. But somehow, on this issue, GM is not outdoing Elizabeth Warren or Bernie Sanders in demanding Medicare For All.

GM is the Big 3 company most invested in factories in Mexico, expanding production in the last five years and even building its Cadillacs there while paying wages of under $3 an hour. It refused to budge on bringing production back to the U.S. This despite the fact that Japanese, Korean, German and other European automakers consider the wages for U.S. labor cheap enough to exploit. In fact, they now assemble more “foreign” cars in the U.S. than GM, Ford and Fiat Chrysler build. UAW negotiators raised the issue of returning production back to U.S. plants, or at least gaining guarantees that more production would not be moved out of the country. But they did not make those issues a deal-breaker.

Instead the UAW appeared to work with GM to craft an agreement with just enough in it for ratification from the rank and file. Workers who had spent almost five weeks on the picket line, nearly all of it collecting just $250 in weekly strike benefits did ratify it, 57% to 43%. The big carrot is the ratification bonus of $11,000 for permanent workers and $4,500 for temps. The full hourly wage is raised to $32.32, with 3% raises in the first and third years, and lump sum payments in the other years.

ORGANIZING IN THE SOUTH

By tradition this GM contract would be the model for contracts with Ford and Fiat Chrysler. But beyond that, some workers campaigning for union representation in foreign-owned auto plants in the South are counting on this strike to energize their fellow workers. Even with some striking GM workers openly suspicious about the kind of contract union bureaucrats would return, and with UAW President Gary Jones under the cloud of an FBI raid of his home, the strength of 49,000 workers speaking out on the picket lines might be an inspiration.

The failure of the UAW in its announced policy in the 1950s and 1960s of union organizing in the South, which News & Letters Founding Editor Charles Denby attributed to the failure to confront racism, has had consequences in the number of non-union auto plants today. Likewise, the working class in Detroit and Flint and Hermosillo, Mexico and Shanghai, all are opposing a common enemy. A common enemy calls for acts of solidarity across regions and across borders.

← PDF of November-December 2019 issue of News & Letters is online
Editorial: The Arab Spring is ongoing →
This work is licensed under a Creative Commons Attribution-ShareAlike 4.0 International License