The year 2017 began with the announcement by the National Indigenous Congress (CNI) that, after a three-month consultation, 430 communities agreed to creating an Indigenous Governing Council from which a woman will run for the presidency of Mexico in 2018. Is this the participation that we can have in this historical moment? 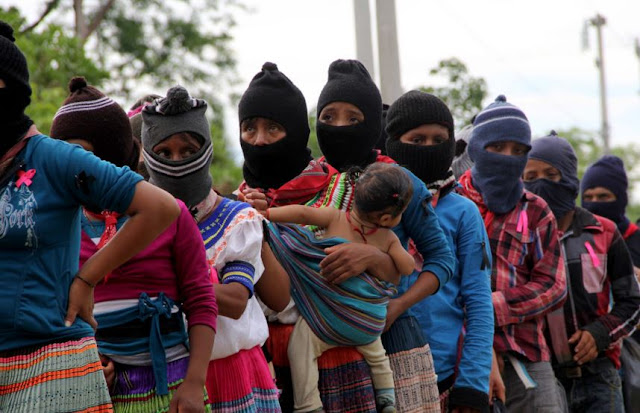 Women and men come to participate in the National Indigenous Congress. Photo: http://bsnorrell.blogspot.com/

“Our consultation,” a CNI delegate says, “is not like those of the government, who gives you a paper and asks you whether you agree with this or that. Rather, [it consists] in having a dialogue like the one we are having right now. That the people, whether from the CNI or not, tell us what’s the situation they are living in, and what would they like to do [to change it].”

ELICITING VOICES FROM BELOW

Thus the initiative has nothing to do with “taking power” through elections, but with eliciting the voices and actions from below. “It is about using the electoral process as an excuse to build what is ours,” another CNI delegate said.

But as important as these actions and voices are as ground for any true social change, something else is needed. The Zapatista Indigenous movement, which has more than two decades of building autonomy from below, has something to tell us about what’s missing.

In “Words on the 21st Anniversary” of its 1994 uprising, the Zapatistas wrote: “Critical thinking is necessary for the struggle…But neither practice by itself, nor theory by itself, is enough. Thinking that does not struggle does nothing but make noise. A struggle that does not think repeats its mistakes and does not get up after it falls.”

Besides the practical, concrete resistance, we need the theoretical, abstract one: critical thought that is in total relationship with revolutionary practice. To think critically would therefore mean to understand not only how capitalism works, but also the emancipatory possibilities of the movements from below, so that we can ask ourselves: What comes next in the construction of a new world? How can it become really new?

This is the meaning of the CNI initiative. It is an open invitation for us all to become “delegates,” that is, to elicit the voices and actions from below and, at the same time, the critical thought about them, in order that practice and theory together give birth to a new society.

FOR EVERYONE WHO SAYS ‘ENOUGH!’

Although the CNI proposal has as its center the ordinary people of Mexico, it is also for other social subjects that struggle for a better country and world: The parents of the 43 Ayotzinapa students, disappeared by the State; political prisoners and their relatives; teachers who want to build an autonomous education at the true service of people’s needs; health workers who want to stop the privatization of medical care; peoples from the country and the city who defend water and land; free media and revolutionary organizations; everyone who says Enough! and wants to build a better society.

For all these the CNI initiative has opened a new moment in Mexican freedom struggles. On May 26-27, the Constitutive Assembly of the Indigenous Governing Council will take place, including one man and one woman from every Indigenous community that adheres to the CNI. However, a “permanent campaign” has already begun, to which we are all invited to participate, both with our theoretical and our practical work.

Join workers from Mexico and share your solidarity struggles
in the shop, school and picket line.
Learn about others’ battles in each issue of News & Letters.

← Women prisoners: ‘Shout Their Names’
As Others See Us: The new French edition of Marxism and Freedom ‘To retake the historical initiative’ →
This work is licensed under a Creative Commons Attribution-ShareAlike 4.0 International License