“Paris climate accord’s suicidal complacency spurs protests” (Jan.-Feb. N&L) shows us how profound our vision about climate change should be. Surely, the Paris Agreement is insufficient, since it is not legally binding and doesn’t do anything substantial to reduce carbon dioxide emissions. However, it is not enough to pose ourselves against this limited Agreement, and look for “better” accords that could lead to a world with alternative energy sources. No, our vision should go beyond the limits of capitalist growth, in which all these accords are trapped. We need a humanist conception of social change. That is implicit in the demonstrations and protests seen both outside and inside the Paris Conference. But still that is not enough. We should, as the article poses, “make explicit what is implicit in today’s struggles for an alternative path of development,” and go deeper, to the self-activity of workers, Indigenous communities, women, students, etc. fighting against this capitalist society, while building a new one: to the place where this practical self-activity is, at the same time, the self-activity of the idea of truly human liberation.

Under the banner of “our work is not done yet,” a variety of groups at the Dr. King march in Los Angeles reiterated the contribution of Dr. Martin Luther King to freedom struggles for Black civil rights. Among numerous banners, “We will not forget” was a pointed reminder of the senseless killing of Black youth by the police in our cities. The presence of many cops made some people feel not so secure after so much police brutality almost every other day. On the other side were banners perverting Black Lives Matter: “Black money matters,” “Black business matters”—a reminder that capitalism even uses human tragedy to secure its well-being. Our work is truly not done until this system is uprooted and a new human society replaces it—a society that does not assassinate its heroes. 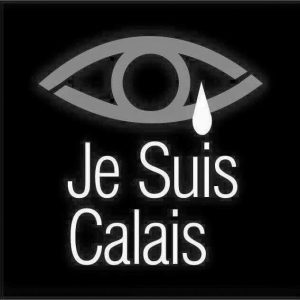 The tearing down of refugees’ tent housing at Calais, France, is awful. Nothing is spared, not even the churches and mosques President Hollande had promised to keep safe. You want France, under the “Socialists,” to be better than this. But the French Left has long been complicit in anti-immigrant racism. In the 1970s, the Communist Party excluded immigrants from municipal housing projects. On Christmas Eve, 1980, a hostel for African immigrants was bulldozed by order of the CP mayor of Vitry, a working-class town near Paris. Far Right forces have taken over just enough populist rhetoric from that old, unprincipled Left to become a growing force throughout Europe. And a very vocal part of the Euro-Amerikan Left, fans of Milosevic and Putin, might be said to have been born on that Christmas Eve.

Retired autoworkers remember that the Flint River has been polluted for decades by industry, notably General Motors. At the same time as people focus on industrial pollution and the national decline of infrastructure, don’t let go of the preventable human tragedy in Flint. Many see the crisis as a way to clear out Flint for new capitalist development, just as in Detroit tax foreclosure and unaffordable water is designed to displace existing residents to pave the way for new development.

Q: What do heroes look like? A: They can look like anyone. Some are scientists, like the ones who went to Flint from Virginia Tech to conduct an objective study of the water contamination’s effects. Also the pediatrician Dr. Mona Hanna-Attisha of Flint, and LeeAnne Walters, the Flint resident who called in the Virginia Tech scientists in the first place, and the other Flint residents who organized for action on the poisoned water.

Most reviews of my book (see “Review: Out In The Union: A Labor History of Queer America,” Jan.-Feb. N&L) have neglected a topic that Adele highlighted: the activity of Queer workers to build unions and establish collective bargaining at LGBT-owned businesses and service centers. Her dialectical view of labor/LGBT politics shows how coalitions can make a dynamic difference in our communities.

Thank you for an accurate writing about David Bowie and fascism (“David Bowie’s legacy,” Jan.-Feb. N&L). Thank goodness for people in motion, those who helped him come back to being for liberation and for Bowie inspiring so many to be for liberation. Being liberated to live in one’s true sexual orientation is one of the issues still in this world. It’s reflected in the current debate as to whether Bowie finally said he’s Bisexual, after saying early in his music career that he’s Bisexual, then in the 1980s saying he’s not. No matter whether he was Bisexual, writer Sally Kohn of refinery29.com, on Jan. 11, said: “We were never supposed to go anywhere but simply to find ourselves, guided by David Bowie singing for us all the infinite possibilities. Bowie was an artist in the truest, most original sense. With his music, with his personas and with his life, he painted a vision for a future we’re only just now starting to inhabit. And it’s amazing.”

I’m proud to say that my friend and Queer rights activist Darrell Gordon was one of the people who received awards from Pathfinders Prevention Education Fund, a Chicago Westside community-based non-profit HIV/AIDS education and training organization. The awards were for dedication to equal access to healthcare for all and HIV/AIDS prevention.

Have you heard about the young man named Steven Kyle Askew killed by police while asleep in his car? This happened in Memphis. He was murdered by two police officers on Jan. 17, 2013, at 10 PM while he lay asleep waiting for a girlfriend to come home from work. These officers, Ned Aufdenkamp, who has a very checkered past, and Matthew Dyess are back on the force though the investigation has not been completed. The officers, who were at this apartment complex investigating loud music, claimed that they saw Steven asleep and knocked on the window and gave “verbal commands” and that Steven pointed a gun at them. The autopsy showed that he was shot from the rear of the vehicle and in the back multiple times. Steven had no criminal record and was not doing anything wrong. Let’s try to get justice for Steven by signing this petition to the Federal Justice Department for an independent investigation: www.ipetitions.com/petition/justice-for-steven-kyle-askew/.

Akiel Denkins, a young Black man, was shot and killed by a Raleigh cop on Feb. 29. This was followed by marches and vigils. According to articles, some people told Akiel’s mom that he was unarmed and shot in the back while fleeing. The police say a gun was found near the body. Even though the media will focus on Akiel’s arrest record, there is nothing more serious than law enforcement’s lethal force, nothing more serious than another dead young Black man. Black Lives Matter, no matter the details.

A referendum which would have allowed Bolivian President Evo Morales to run for another presidential term was narrowly defeated, 52% to 48%. Morales, the first Indigenous president, battled against a neoliberal elite, significantly reducing poverty, creating a far more progressive Constitution and ending significant parts of Bolivia’s historical racist rule against its Indigenous majority. However, the social upheaval carried out by Bolivia’s impoverished masses in 2000-2005 was demanding a far deeper social transformation than Morales and his party were prepared to undertake. Where 2000-2005 demonstrated a massive social movement from below as the motor of social change, post-2005 rule focused more on state intervention in the economy. Thus, conflict between social movements and the state, whether in the Indigenous city El Alto or in the fight for Indigenous rights in the TIPNIS region, came to the fore. Did this not set the ground for the defeat of the electoral referendum? Can the social movements from below now regain their initiative?

For months it has looked like the Trump campaign was modeled on the George Wallace movement and Mussolini’s rise to power, combined with Silvio Berlusconi’s control of the media. But as Trump keeps topping himself with baser slurs against Mexicans and Muslims, this birther candidate has gathered into the fold all manner of white supremacists, from the Klan leader and international genocide supporter David Duke to the prominent Nazi who roughed up a Black woman at a Trump rally in Louisville, Ky., at Trump’s instigation. The belated attacks from Republicans will likely have no effect, as the rest of the party is, as you hear Trump supporters say, thinking what Trump dares to say out loud.