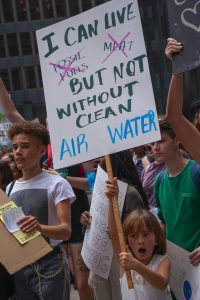 I am particularly impressed with and inspired by the youth and the elderly who are pushing for IMMEDIATE ACTION to be taken to ameliorate, to reverse—yes, that’s possible IF the correct actions start occurring NOW—what I call climate damage. On Sept. 20 my husband and I marched in San Francisco with 1000 Grandmothers For Future Generations Bay Area, one of the locals of the larger 1000 GFFG. They especially advocate for Indigenous peoples and other peoples on the frontlines, which includes those in the developing world who are already hardest impacted by climate damage. Youth, thank you for shouting at us adults and keep shouting! All of us who live on planet Earth—human, fauna and flora—need your activism, your passion and your ideas.

I was unable to attend Detroit’s Climate Strike, which a friend reported drew about 700 people. There was little advance publicity here and all news was dominated by (1) the Detroit Youth Choir’s second-place finish on “America’s Got Talent” and (2) the Detroit Lions winning some football games. Although the choir didn’t win the million-dollar prize, local foundations gave the group a locally-sourced $1,000,000. I am very glad for the support DYC received, but can’t help thinking what other worthy efforts could do with similar resources, like funding rehab of blighted houses that will otherwise be demolished. However, political and social will is lacking.

Alberta truckers demonized Greta Thunberg, seeing her as their enemy, rather than capitalists’ exploitation of independent truckers or the imminent threat of self-driving trucks that the industry expects to introduce. It shows how useful it is for bosses to preach that both classes are united around jobs, jobs, jobs. Trump was touting “Bring back coal” in 2016. The reality was that if he brought back coal it would bring back jobs for just the handful of heavy equipment operators leveling mountain tops and depositing them to leach into creeks and rivers. Bring Jobs Back or a vision of a world of Green Jobs are stopgap dead ends. The road to take, the self-activity of the youth in the Climate Strike movement, is not separated from the goal, a society where self-activity is possible over the continued expansion of capital.

Our nation cannot afford to debate the pros and cons of climate change and its effects on our lives. The time for taking the strongest possible measures to reverse global warming is here—in fact, we are already decades late in responding to this catastrophe. It is our great fortune that children have not yet become as apathetic and passive as older people. These courageous children and young people are the greatest hope for the survival of the human race. The need of the moment is not to question and doubt these intelligent youth. Instead it’s our responsibility to feel their aliveness and be inspired by their authentic enthusiasm and concern for the welfare of our Earth and our lives. We must rejoice and respect their timely insights!

Regarding “Socialism and Ecology” (Sept.-Oct. N&L): the capitalist system is the cause of climate disaster and the destruction of the earth and its diverse life forms. As major capitalist countries like the U.S., China, Russia, Brazil, Japan, destroy the environment for resources, more greenhouse gases are released that increase global warming. The logging industry together with worsening fires destroys CO2-absorbing trees. The workers under the capitalist labor process work not to fulfill their human potential but to get food, shelter, clothing needs, as well as transportation, education and entertainment wants. A socialism created through elections, as electing Bernie Sanders into capitalist government, will not work. Big money corporations have too much leverage there. We need a socialism created from the masses from below together with anti-capitalist educators, scientists, technologists, environmentalists, intellectuals and activists.

In a short, powerful confrontation with world leaders at the UN on Sept. 23, 16-year-old Greta Thunberg personified the maturity of our age, which is in inverse ratio to the supposed maturity of the adults in charge. The clarity and content of this 16-year-old’s message demands that any Marxist-Humanist perspective on “Ecology and Socialism” must also begin with ecology as a dimension of Marx’s idea of freedom.

Now there are dozens of articles about how socialism is the solution to climate change. You would think they would put workers’ self-activity at the center of it, but they don’t. One I just read defined socialism as public ownership plus democratic control of production and society. Supposedly “democracy” solves the problem of the destructiveness of the “socialism” of the USSR and China. Articles like that devolve into a discussion of “socialist” policies for the government. They miss what your essay on “Socialism and Ecology” points out: only on the basis of a revolutionary change in which self-activity is the driving force, and in its very nature drives to break down the division between mental and manual labor, can we halt the direction toward ever more accumulation of capital.

The bleak vision of life on earth if it warms even two more degrees is the logical and ultimate expression of capitalism. The science was there for all to see long before Greta Thunberg walked out of school. The science was clear before Al Gore won an Oscar. The science was obvious to in-house scientists at Exxon in the 1970s, and it was obvious to Exxon that something had to be done. So what was done was shelving the science, if not perverting it.

In Marx’s time, factories with unlimited working hours consumed three generations in a single generation. Today not just three generations but all future generations are at stake as we face climate catastrophe. Once again it will not be the response of capitalists that could dodge that catastrophe; it will be up to workers and youth and Indigenous activists to save capitalism from itself. But this time it will be all for naught if we don’t also save the earth from capitalism.

N&L is the only publication of its kind! Wish I had known about it earlier in my prison time. I have made efforts to inform other prisoners about N&L. I especially enjoyed the “What Is Socialism?” essays and articles by Faruq.

COUNTER-REVOLUTION AND REVOLT IN MIDEAST

I’m extremely frustrated with the news that Trump will allow a Turkish invasion of northern Syria. People say Trump sold out the Kurds, and this is of course true. But the process of selling out the Kurds has been one we’ve watched for years. It’s been a cruel, years long, incremental plan of false promises; of Kurds being sent to the battlefield and the U.S. inching closer and closer towards Ankara while pretending to be impartial. When ISIS was “defeated,” the plan was already set in motion. The Kurds would be betrayed, it was only a matter of when. Keep lying, get into the territory and pull out, hope nothing happens. If it doesn’t, you’ll be fine. If a problem is brought to birth, escape and deny responsibility. Either way, it’ll be fine. This is the American way. 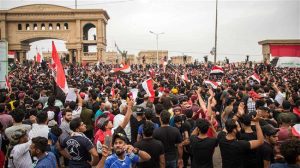 Contemporary Left, particularly in the West, has these three characteristics:

The above converts the Left in general to puppets of an array of powers as they too confront emancipation-seeking masses in Syria, Libya, Iraq, Lebanon and Iran.

Lebanon is burning—forest fires have consumed large areas, leaving people homeless and destitute. Many blame the government for lack of an adequate response. But this tragedy is nowhere on U.S. mainstream media, even as revolt is exploding in Lebanon. A college student in Michigan with family in Lebanon has a campaign on FundRazr: “Help Lebanon Go Green Again” to assist people in crisis and to replant Lebanon’s forests. I thought your readers would want to know.

In Detroit, there are several new elements to the GM strike. The older workers are denouncing the two-tier wage system as vehemently as their younger co-workers. Wage demands are rarely mentioned, except to end the two-tier system and to grant permanent status and a raise to temporary workers (called perma-temps because temporary is seemingly measured in geological eons, like the ice ages). They also want to see the lower-tier workers gain full wage parity in a lot less than the eight years in the current contract.

Meanwhile, there are massive ripple effects of the strike to local small businesses. One owner of a company that trucks parts to GM factories may have already gone out of business, with dozens of trucks sitting idle. He said that even when the strike ends it would take him weeks to get his business up to speed again.

The Chicago Teachers’ Union strike that began Oct. 17 reveals that the gains of the 2012 strike are the building blocks for today’s actions. Despite Chicago Public Schools closing 50 or more schools in 2013, the vision of creating

“Schools Chicago’s children deserve” lives on. This vision energized grassroots organizing of teachers and school communities in statewide strikes over the past seven years in West Virginia, California and North Carolina. Even the media narrative has changed from claiming that teachers only want more money, to reporting first and foremost the demands for support staffing including librarians, music and art teachers, nurses, and social workers.

The striking Chicago teachers will not let go the demand for social workers and nurses in every school. For the last five, six years, that has been the focus for Chicagoland and so many other urban centers. There’s a focus on trauma support because some of the children experience something like war zone trauma. People who want to support the strike should ask the picketing teachers about their demands around social work, and having a nurse in every school, particularly focused on trauma.

Amid the increasing political and legal maneuvers of a divided Parliament and Prime Minister Boris Johnson over Brexit, three realities emerge. One: despite all the economic reasons for British citizens to remain in the European Union, racism against immigrants from Asia, Africa and the Middle East has motivated many to decide that leaving is better. Two: the “deal” that Prime Minister Johnson worked out eliminated many workers’ rights and protections that had been elements of the previous agreement. Three: huge numbers of British, Scottish and Northern Irish citizens continue to see the folly of Brexit and continue to protest.

To our incarcerated readers