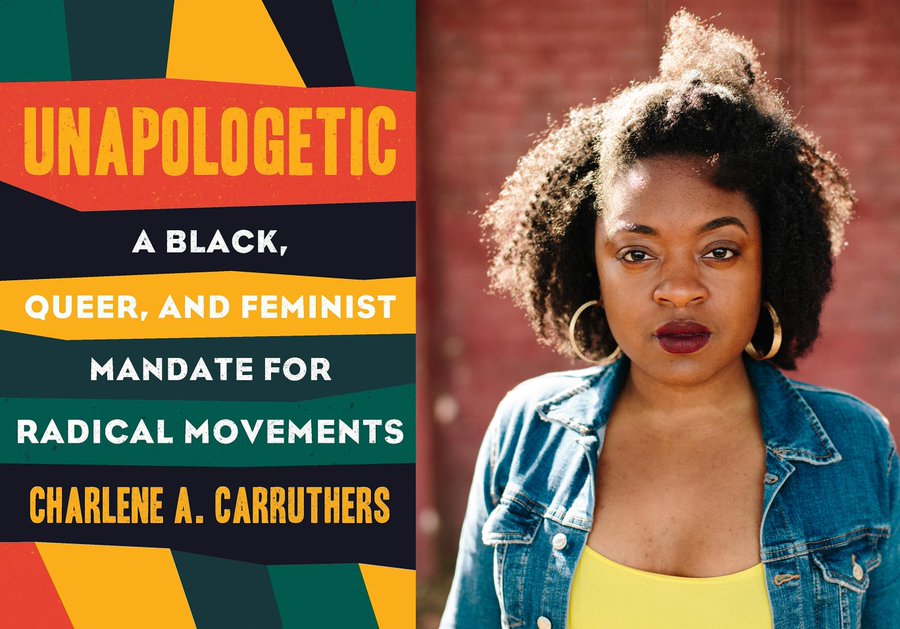 The murder of George Floyd sparked massive, Black youth-led protests worldwide whose participants then looked for books to explain 21st-Century Black liberation movements. Charlene Carruthers characterizes her work, Unapologetic: A Black, Queer, and Feminist Mandate for Radical Movements (Beacon Press, 2018), as “a book for all people who are curious about and committed to the struggle for Black liberation.”

A MANUAL FOR LIBERATION

Carruthers credits her community organizing experience, mentors during school and college, and time spent in Africa, Palestine and Haiti for forming her voice. It is a manual for much-needed critical thinking by and for Black liberation movements, confronting their own explosive growth and an increasingly vicious assault from the Right.

Chapter I, “All of Us or None of Us,” quotes the foundational Black Lesbian feminist “Combahee River Collective Statement” (1977): “We believe that the most profound and potentially most radical politics come directly out of our own identity…if Black women were free it would mean that everyone else would have to be free since our freedom would necessitate the destruction of all the systems of oppression.”1“The Combahee River Collective Statement,” in Home Girls: A Black Feminist Anthology, Barbara Smith, ed., Kitchen Table: Women of Color Press, NY, 1983.

Carruthers insists that this concept of identity politics means that the Black Queer feminist lens is essential to a radical, principled movement, which “people need to bring their full selves into the process of dismantling all systems of oppression [and to be] aided in creating alternatives of self-governance and self-determination” (p. 10).

The next two chapters call for reimagining the Black radical tradition, which “approaches the dismantling of capitalism, patriarchy and anti-Blackness in new ways while still being grounded in earlier movements” (p. 20). She does not limit this to Black liberation struggles in the U.S., nor to politics: “Black feminism, communism, socialism, liberation theology and hip-hop…have transformed the shape of Black struggle and life by influencing thought and action” (p. 24). She cautions that “liberation is a collective effort in which, even after freedoms are won, continual regeneration and transformation are necessary” (p. 25), an understanding reminiscent of Karl Marx’s call for “revolution in permanence.”

What kills the Black imagination? Anti-Blackness, which denies the humanity of Black people; Black-on-Black and gendered violence, “which can be eradicated by Black people only if it is done in tandem with dismantling the systems of capitalism and patriarchy” (p. 33).

Carruthers asserts that incomplete stories about the history of Black liberation have led to ineffective solutions and stories that don’t include critique are counterrevolutionary. Rosa Parks was not “just tired” in 1955 but a seasoned NAACP organizer. Bayard Rustin, the openly Gay architect of the 1963 March on Washington, was not allowed to speak there.

The second half of the book draws on Carruthers’ work in community organizing in Chicago, where she founded and has led the Black Youth Project (BYP100) since 2013. To combat the challenges within all contemporary Black liberation movements, Carruthers poses specific commitments and questions.

THE NEED TO DEVELOP A VISION OF FREEDOM

The commitments are: build many strong leaders; practice healing justice; combat liberalism through principled struggle. Thus, “movements can cultivate radical and even revolutionary means for liberation” (p. 85). The questions activists must ask—“Who am I? Who are my people? What do we want? What are we building? Are we ready to win?”—map out guidelines so that activists develop a vision of liberation for themselves, their organization and their goals.

Carruthers turns to a history of community organizing in Chicago since the 1970s, including the 19-year campaign to oust police terrorist Jon Burge and to gain reparations for his torture victims; #SayHerName; and justice for Laquan McDonald. This is a starting point for a working model of organizing. Her concluding mandate is “a call to organize…we must succeed for the sake of collective liberation” (p. 140).

Carruthers recognizes that “our collective imaginations must burst open in order to believe that liberation is possible” (p. 139). This reveals her underlying philosophic attitude.

← Georgia requires a new flag!
Voices From the Inside Out: Debating Trumpism →
This work is licensed under a Creative Commons Attribution-ShareAlike 4.0 International License