Editor’s note: Our era, when racist police gun down Black men, women and youth, continues a history as old as the U.S. The piece excerpted here, Raya Dunayevskaya’s Lead-Editorial from the June-July 1970 N&L, originally titled “Nixon’s Wars at Home and Abroad,” shows some of that history and how racism can be spurred on by this country’s leaders and would-be leaders, out for power. It takes up how Left movements respond to racism and the attempt to answer the question by funneling liberatory impulses into the dead end of electoral politics. The relationships between the Black freedom movement, anti-war youth, workers, and philosophy of revolution remain as critical today as when this article was written.

On May 14 [1970], some 75 white racist cops and highway patrolmen in Jackson, Miss., facing a group of Black male youth clustered before a Black women’s dormitory at Jackson State College, “heard sniper fire” and began shooting up the dormitory. When the bullets couldn’t penetrate the walls, they turned their guns against the unarmed males on the street. Phillip L. Gibbs, 21, a student at the school, and James Earl Green, 17, a high school student, lay dead. Fifteen others were injured. 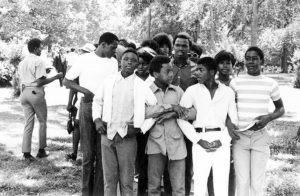 High school students marching through downtown Jackson, Miss., on May 15, 1970, to protest shootings at Jackson State College. This photograph was taken for Jackson-based Kudzu, edited by David Doggett.

The racist mayhem is not unconnected with Agnewsticks such as “the spawning ground and sanctuary of the movement is the American University.” So great a favorite in the South has Vice President Agnew become that he was chosen to be the featured speaker at a Confederate memorial.

Kent, Ohio [May 4]; Augusta, Ga. [May 11]; Jackson, Miss.—12 dead and some 28 injured—all this has happened in the first two weeks of May, long before the hot summer has started, long before the student youth who will graduate will first find no jobs waiting for them, and long before the labor contracts will expire this year of recession.

Whether it is warmongering National Guardsmen or racist cops who shoot, bayonet and beat and burn youth to death, the point is: who is inciting these “law and order” men to perpetrate these lawless and murderous acts? Who inspired the New York police to look the other way as some racist construction workers attacked the anti-war youth?

Who, if not the Agnew-Nixon Administration, is manipulating an alleged “silent majority” to lash out against the youth “with no more regret than we should feel over discarding rotten apples from a barrel”? If such Agnewsticks are considered vice-presidential prerogative, his “freedom” no less, then why shouldn’t the armed Establishment feel they have the license to act against radical youth that Agnew dares call “the criminal Left that belongs, not in a dormitory, but in a penitentiary”?

And what is the purpose other than fascistic brainwashing for the studied and persistent attacks on the mass media, especially the TV, as they photograph these super-patriots and racists in their nefarious acts against dissenters? Who other than Nixon-Agnew-Mitchell—those polluted minds and foul mouths—have made “manhood” synonymous with warmongering, and recorders of facts synonymous with “an effete corps of impudent snobs”?

Where do we go from here? Is it possible to conclude anything else from these gory events than the fact that the President and his alter ego have, from the moment they got into the White House, been preparing for the undeclared war abroad to be extended into a civil war at home?

Now that Nixon has shown that his wars abroad are but extensions of his wars at home, it becomes imperative for the New Left, the anti-war movement, the Black liberation movement and Women’s Liberation Movement to take a second look at themselves, at their theoretical as well as practical activities, for there are danger signals here too. Not only is there an attempt to divert the anti-war movement into the political field—to vote for “doves”—there are also elitist opponents of labor who play up the fact that some construction workers had beat up anti-war youth demonstrators.

There is no doubt that the building workers’ racist union, along with some longshoremen under Mafia control, are outright reactionaries who must be fought. But to portray these as characteristic of the labor movement at this time when strikes on the part of white and Black workers—from the postal workers to the teamsters and from the teachers to the welfare workers—are at their most militant, is to fly in the face of the facts, as well as to fall into the old divisive capitalist trap of separating worker from worker, and workers from intellectuals.

Of course, there are some workers who oppose the anti-war demonstrators. So does part of the student body. Of course, there are some sectors, like the construction workers, who are reactionaries. So are the “Young Americans for Freedom.” Neither fact can possibly take away from the full truth, and that is that a whole generation now opposes the imperialist war games, the capitalist planned recessions and the racist fabric of American life.

More characteristic of the present stage of intensified strike and anti-war struggles are the two Los Angeles Teamster locals who distributed leaflets in opposition to the construction workers and, at the same time, asked the students to help them in their wildcatting against both management and the labor bureaucracy. At the same time, it is clear that the struggle against the war must deepen to the point where it concerns itself with the struggle against the whole system which produces war—capitalism.

This stage of heightened labor struggles comes at a time when even the administration cannot hide either the fact of rising unemployment, or that the inflation continues despite the planned unemployment. The economic crisis in the country is inseparable from the growing Black unrest. These two movements must be joined with, rather than kept poles apart from, the anti-war struggles.

Some of the student Left better ask themselves why it is that, as against the mass demonstrations for the Kent martyrs when no less than 426 campuses were shut down at least in part, only 40 Black students, and no whites, gathered at the University of Mississippi campus at Oxford to protest the shootings at a Jackson college. It behooves the white students to contrast the fact that Black students at Tuscaloosa sat down spontaneously to show their solidarity with the Kent students. But, thus far, few white colleges have sprung up to demonstrate their solidarity with the Blacks.

STUDENTS MUST LISTEN TO WORKERS

Along with the revolutionary Black dimension, what is needed in the expansion and intensification of the anti-war movement, is for the youth to begin to listen, seriously to listen, to the questions that workers raise. Thus, some of the workers who did not march said that they were definitely opposed to Nixon’s war, wanted all GIs out of Southeast Asia, but did not wish to march under a Vietcong flag. They were for self-determination of the Vietnamese people, but did not want to make it appear that they preferred Russia or China to the U.S.A. In a word, they were asking for an independent stand, both against the war and for labor’s rights here, against both private capitalism and state-capitalism, which calls itself Communist.

The pragmatism that permeates the “unideological” Left, who consider any unity of anti-war forces to be above an underlying philosophy of liberation, cannot for long shut out concern for the international ramifications of the latest stage in the Indochinese war as well as, and, above all, for the objective revolutionary forces and their search for a totally new way of life.

To order your copy of American Civilization on Trial: Black Masses as Vanguard, click here.

Marxist-Humanists know that the class enemy is at home. But they also know that, just as no country can be seen outside of a world context, so none can be separated from the underlying philosophy which will give the spontaneous actions of the masses their direction. In a word, the freedom struggles cannot be separated from the philosophy of freedom, since only as they are united can the creation of the new go hand in hand with the overthrow of the old instead of, once again, having the revolution go sour the day after the conquest of power.

To fill the theoretic void in the anti-war movement has become a matter of life and death as we fight the repressive forces unleashed by the Nixon Administration against not only its open opponents, but against the masses who, in order to live at all, must fight recession and racism. 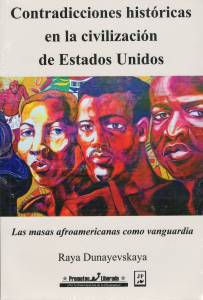 ← Readers’ Views, May-June 2016
One year for 29 lives! →
This work is licensed under a Creative Commons Attribution-ShareAlike 4.0 International License