Mexico City—Since the beginning of the national strike against the “educational reform” on May 15, the government has faced the teachers’ movement with ever stronger repression. The cruelest of such state crimes occurred in Nochixtlán, Oaxaca, on June 19 when the federal police assassinated 11 people and injured hundreds. 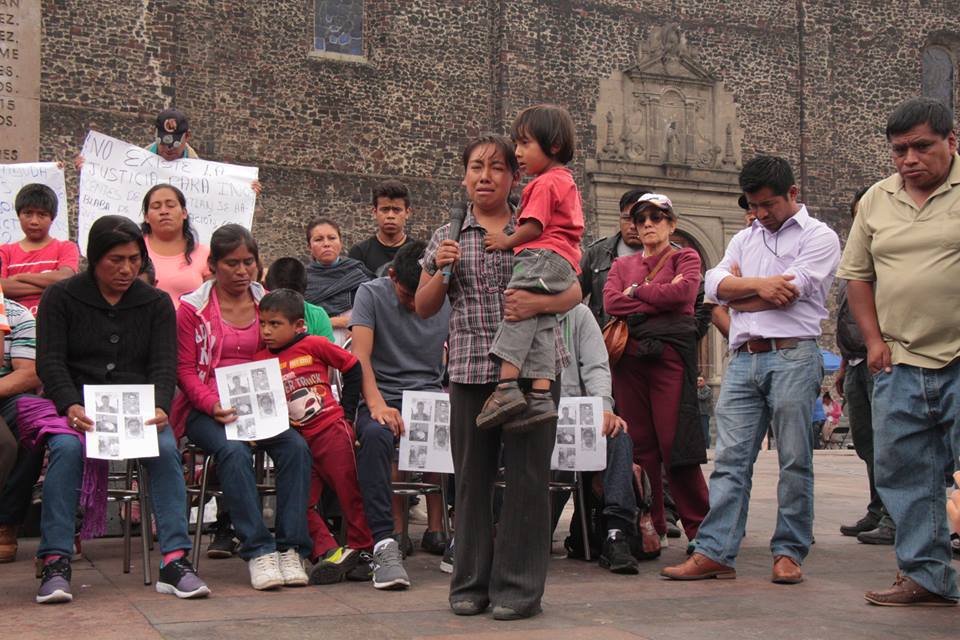 A public presentation at Plaza de las Tres Culturas in Tlatelolco on July 31, 2016, by the families of the students killed by the Mexican government in Nochixtlán.

In the two months since, the protests haven’t stopped: The national sit-in in La Ciudadela in Mexico City is as big and active as when it began. Sit-ins and occupations are still going on in Michoacán, Guerrero, Oaxaca, Chiapas and other places on a regular basis.

The “educational reform” had not been cancelled by the beginning of the 2016-17 school year on Aug. 22. Parents and teachers continued striking and occupying the schools in several parts of the country.

A mother from Chiapas said: “It is better to lose a school year than lose our children’s education for the rest of their lives…We don’t mind our children missing school. What we do mind is the privatization of the educational system.”

The significant mass reaction to Nochixtlán forced the government to finally have a dialogue with the teachers. Such dialogue, besides trying to “repair the damage” of the massacre in Nochixtlán and of the application of “educational reform”—teachers being fired, unpaid and/or imprisoned—would also take up the central question of calling off the “reform.”

Over two months have gone by since then without any substantial results. Thus we need to ask: Can such “negotiations” take us where we need to go as a society—to cancellation of the “educational reform” and the construction of an alternative educational project? Or is it required that we pave a new way forward? If so, how can we build it?

To answer such questions we have to look at what the teachers, parents and people who support them are thinking and doing.

First, although the teachers have attended all the meetings with the government, they have stated that if the “educational reform” is not cancelled, their movement will continue indefinitely.

Secondly, let’s take a look at how the construction of an alternative educational project has been going on for several years.

In Oaxaca, dissident teachers have been working for more than a decade on the Transformation Plan for Education in Oaxaca (PTEO). In Guerrero, there are the altamiranista schools. In Michoacán, the teachers have created their own textbooks for elementary and middle high school students, written in Spanish and in Indigenous languages. In Chiapas, the Alternative Educational Project is being prepared. Mexico City—like, surely, several other places—has its own history regarding the subject.

What all these experiences have in common is they grasp the cultural and ethnic diversity of the Mexican population and try to develop educational programs accordingly, so that education can truly be at the service of society. They also all seek to incorporate the ideas of every social group related to education, including teachers, parents, students, researchers, communities and original peoples.

We are witnessing educational projects in total opposition to the market-oriented and diversity-unfriendly capitalist plan. In the end, however, such alternative projects can’t be fully achieved in the context of capitalism. This is where the teachers’ struggle shows its link with the need to totally uproot capitalist society. The struggle headed by the teachers is thus, in germ, one for a new, truly human world. The participation in it of other social subjects, parents, normalista students, Indigenous communities, etc., is actually giving flesh and blood to such emancipatory ideas.

The meaning implicit in these thoughts and actions (the sit-ins and blockades, and the experiences of building alternative educational projects) goes far beyond any “negotiation” with the government. We don’t have to look any other way but to the theory and practice of these subjects in resistance in order to realize how the foundations of a new society are already being set. There’s no need to bring anything from the outside.

We need to ask: How can we unleash the potential contained in all these thoughts and actions from below until the point that we achieve a new, truly human society? To answer is a most urgent task, both for the resistance movements and for the thinker-activists who decide to support them and be one with them.