Investigating the process leading to the Russian Revolution, understanding the contradictory years 1917-1923, as well as grasping what transpired in the USSR after Lenin’s death and within the capitalist world under the impact of the Great Depression are all crucial to unearthing the significance of the Revolution 100 years later.

Today, however, we are making that investigation in a world whose dominant ideologies deny the Russian Revolution’s singular importance, dismiss it as a deviant historical footnote and obscure its contradictory meaning. Two dimensions of the present moment stand in our way.

First is a world in economic, political and social disarray that includes: a permanent drive by the U.S. for world hegemony in conflict with nuclear-armed Russia, China and the nuclear ambitions of North Korea; a multitude of reactionary regimes and non-state powers determined to crush any authentic opposition from below under the cover of religious dogmas and narrow nationalisms; and an unprecedented refugee crisis involving millions of people in the Middle East, Asia, the Americas and Africa, with tens of thousands already massacred in ongoing wars. We are in a cauldron of seemingly permanent war and suffering.

Second is the ideological pollution. A host of ideologues seek to smother the idea of liberation and dismiss as unreasoning the human beings needed to achieve emancipatory social transformation. They wish to consign authentic revolution to the distant past and imprison us within a no-exit future. While this is to be expected from neoliberal and other modes of reactionary thought, more distressing—and a somber indication of the depth of the ideological pollution—is the lack of an emancipatory vision from many who see themselves as radical critics of today’s oppressive reality but for whom revolution is hopelessly utopian and doomed to be dictatorial rather than liberating. 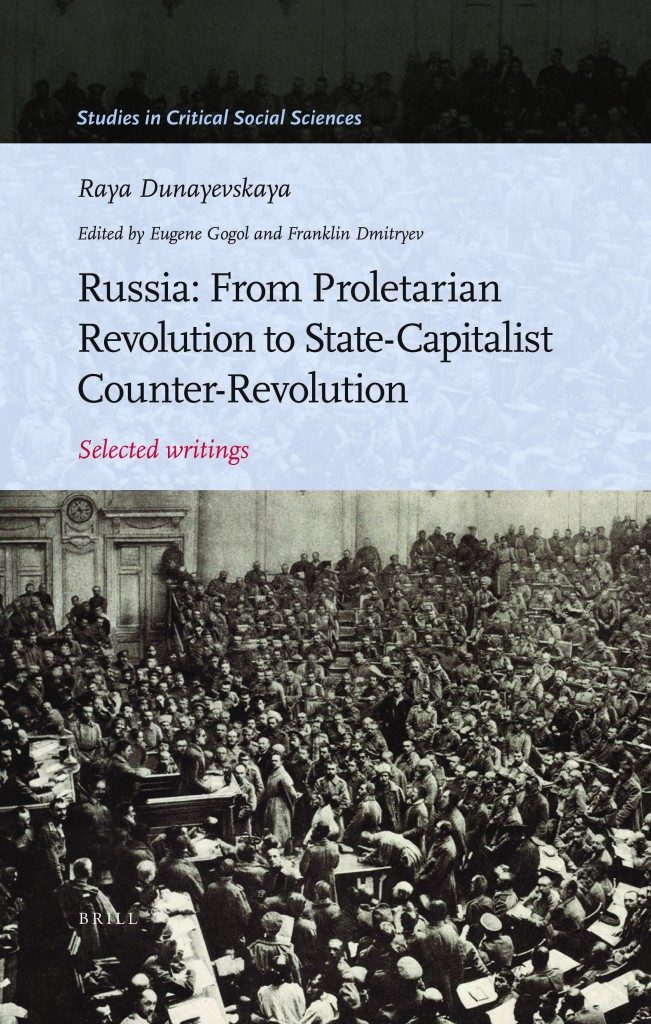 A critical return through the revolutionary mind of Raya Dunayevskaya to the world-shaking events of 1917 that forged a giant leap in humanity’s emancipation, as well as a devastating transformation into opposite in the decades that followed, can provide us with a needed vantage point to confront our own contradictory, unfree world.

1917 was a world-historic turning point—the first successful social revolution against capitalism. But, before that, there arose a crucial test for revolutionaries—the outbreak of the First World War in August 1914. It was a test that the established Marxism of the Second International failed, betraying the world’s masses. Despite a decade and more of anti-war proclamations, speeches and demonstrations, once war broke out the vast majority of the socialist and trade union groups backed the governments of their respective countries. The largest socialist organization, the German Social Democracy, supported the war, and its members in parliament, save for Karl Liebknecht, voted to fund it. He and the great Polish revolutionary and theoretician Rosa Luxemburg would break from this betrayal of socialist principles.

From Russia, a crucial exception came from Lenin and the Bolshevik Party, who sharply opposed the war. To Lenin the betrayal was such a shock that he sought to work out its root and to establish theoretical ground for his revolutionary viewpoint through a return to the philosophic origins of Marxism within the Hegelian dialectic. His Conspectus of Hegel’s “Science of Logic” (Philosophic Notebooks) provided “philosophic preparation” for the events from February to October 1917, and for the first conflictive years of Soviet power, 1917-1923….

In the darkest hours of war, a new beginning became possible. It was based on the activities of masses of workers—including women workers—and peasants.…

[Dunayevskaya’s] study did not end with analyzing the revolution and the contradictory practice of the period afterwards, but continued with its transformation into its opposite, the establishment of state-capitalism, and its global impact in the 20th century. Crucial—after this first attempt to build a workers’ state was transformed into the monstrosity of a state-capitalist tyranny—was Dunayevskaya’s determination to find new beginnings for revolutionary Marxism for her age.

1. Translation of and Commentary on Lenin’s “Abstract of Hegel’s Science of Logic”
2. Dunayevskaya’s Changed Perception of Lenin’s Philosophic Ambivalence, 1986–87

3. Lenin on Self-determination of Nations and on Organization After His Philosophic Notebooks
4. On Trotsky
5. On Bukharin
6. On Luxemburg
7. On Women Revolutionaries in Russia

10. On Stalin
11. The Beginning of the End of Russian Totalitarianism
12. Post-Stalin Russia
13. On Mao’s China
14. The Sino-Soviet Split
15. The Cuban Revolution and What Happens After?
16. State-Capitalism as a “New Stage of World Capitalism” vs. The Humanism of Marx
17. Battle of Ideas

Ask your library to order it!

← Wisconsin Transgender prisoner traumatized
On the 100th anniversary of the Russian Revolution. Historic initiative of the masses and Lenin’s philosophic break →
This work is licensed under a Creative Commons Attribution-ShareAlike 4.0 International License