Lead article from the January-February 2015 issue of News & Letters

In the final analysis, racism is evil because its ultimate logic is genocide…To use a philosophical analogy here, racism is not based on some empirical generalization; it is based rather on an ontological affirmation. It is not the assertion that certain people are behind culturally or otherwise because of environmental conditions. It is the affirmation that the very being of a people is inferior…I submit that however unpleasant it is we must honestly see and admit that racism is still deeply rooted all over America.

Protests erupted in cities across the U.S. and around the world following the Nov. 25 decision by a St. Louis County grand jury not to indict Ferguson police officer Darren Wilson for the cold-blooded murder of 18-year-old Michael Brown (see “Rage against lawless police murders“). Thousands marched under the slogan “Black Lives Matter!”

These demonstrations grew in the wake of the equally outrageous Dec. 3 decision of a Staten Island, New York City, grand jury not to indict NYPD officer Daniel Pantaleo for the murder of Eric Garner—choked to death for the “crime” of selling loose cigarettes. This despite Garner’s murder being captured on video, the supposed NYPD policy prohibiting choke holds, and a coroner’s ruling of death by homicide.

POLICE GET AWAY WITH MURDER

In both cases, it was obvious the fix was in. “Prosecutors” never intended to hold these murdering cops responsible—in Ferguson badgering witnesses, knowingly introducing false evidence, and allowing the use of racist testimony as to Black men being “demons,” animals incapable of feeling pain, and other vile lies harking back to the days of slavery. It was the worst of America on display: racist, brutal and shameless.

Demonstration on Nov. 28 in New York City in solidarity with Ferguson, Mo., protesters and encouraging a boycott of Black Friday Consumerism. The All-Nite Images,https://www.flickr.com/photos/otto-yamamoto/15305646874

The demonstrations answering it have been organized in large part by Black youth, including women and Queer youth, and attracted white, Latino and Asian allies. They have made important connections to other struggles; for example, Black Friday labor protests and calls to boycott Walmart helped lower holiday sales by as much as 8% from last year.

As 2015 begins, this new movement is coming face to face with its absolute opposite: an incoming Congress dominated by wealthy, right-wing racist white men—the very people who embody the idea that Black lives do not matter. They are already taking aim at women, people with disabilities, immigrants and the environment. The concept of “Two Americas” has seldom felt so true.

Recently formed groups like We Charge Genocide make the same connection as the larger Black community between the murders of Michael Brown, Eric Garner, Trayvon Martin, Tamir Rice, Oscar Grant, Rekia Boyd, Renisha McBride, Jordan Davis, John Crawford, Dante Parker, Ezell Ford, VonDerrit Myers Jr., Laquan McDonald, Cameron Tillman and so many others. The hundreds of thousands who shut down main streets from New York to Los Angeles represent a new moment in which a young generation is connecting to high points of past struggle like the Civil Rights Movement and the 1992 L.A. Rebellion, and aiming to go further.

The new voices raised are critical of all aspects of life in a society which has been so poisoned by its festering racism and crisis-ridden capitalism that it is no longer tolerable. They mean to tear this racist society up by its roots:

Tef Poe, Ferguson: “Mike Brown sparked a universal moment of clarity for young Black people. We feel as if no one in a position of power respects us. We feel as if we are not viewed as humans. Police officers blatantly referred to us as monkeys and dogs. A select few have lost their jobs as a result of their actions, but a great many remain gainfully employed.”

T-Dubb-O, Ferguson: “We got all these Black athletes, Black rappers, all these one-percents, record label owners, CEOs that’s not saying nothing, that’s not bringing nothing to the community. You’re bleeding the community dry. The shoes we buy, the clothes we buy, the music we play, the videos we watch. You glorify being from the hood but do nothing for it. You glorify being from the trenches but do nothing for it. When they killing us, you stand by silent. The streets don’t believe you.”

Synead Nichols, New York: “People want to see change and artists do as well. We want to see that difference because we have a hope for this world. There is this utopia of things that we are striving for. Who knows if it can be had, but I think we can get there. It’s not an unattainable thing.”

Brianna Richardson, Ferguson: “What you see on the ground and what you see on the news is two completely different pictures. You’d think this is all about men, giving all these speeches, having all these ideas. When you’re there, you see women have a more prominent role. When it comes to being a Black woman, you deal with the oppression of both race and gender. You can’t turn one off. Black lives matter, Trans lives matter, women’s lives matter. I’m standing for all of Black lives.”

Ethan, We Charge Genocide, Chicago: “The American flag is stitched with the blood and agony of the denial of people of color’s humanity. The state is responsible for torturing and displacing Indigenous people with violent physical, spiritual and sexual assaults, along with poisoning all of our ecosystems. Rape is the second highest crime committed by police, at least 500 people tasered to death in the U.S., over 12,000 human lives lost to police genocide.”

The rulers know exactly what they are fighting. The right-wing propagandist who wrote a recent article in the cult-owned Washington Times opined that billionaire George Soros was the real force behind the protests, and that his purpose was “to widen the scope of the incident to focus on interrelated causes—not just the overpolicing and racial discrimination narratives that were highlighted by the newspapers in August.” (“George Soros funds Ferguson protests, hopes to spur civil action,” Washington Times, Jan. 14, 2015.)

This resort to anti-Semitic conspiracy theorizing should surprise no one. Since 2008 the racist Right has engaged in a non-stop effort to crush whatever ideas of freedom and self-determination allowed President Obama to enter the White House—ideas, ironically, that he has largely repudiated or ignored himself. It has brought big corporate money together with formerly fringe elements, from the Ku Klux Klan to the John Birch Society, neo-Confederates and white nationalists, in the Tea Party and other falsely claimed “grassroots” organizations.

These attacks are directed against the drive toward revolutionary democracy that is inherent to Black freedom struggles. A significant part of the ruling class has signed off on this fascist project. It is the way the issue of class is always played out in American society—inseparable from the realities of racism.

THE MILITARIZATION OF SOCIETY

Class is also inseparable from the question of imperialism. The U.S.’s imperialist wars have fed the militarization of domestic policing that has been so much a part of the State’s response to the protests in Ferguson. As Amnesty International observed, the rights to peaceful assembly, freedom of association, and freedom of expression were seriously imperiled. A Marxist-Humanist activist on the scene said, “It may not be a revolution yet, but this sure feels like a war.” 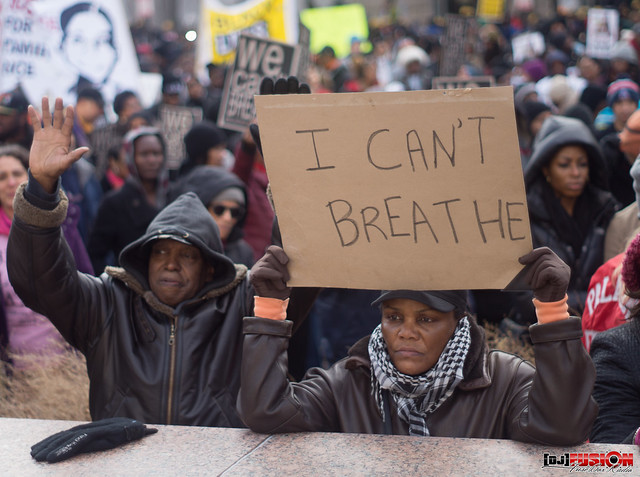 Black and poor communities have long understood the role of the police as an occupying army. Ferguson is a perfect example: a community that has long been exploited and plundered, as St. Louis County squeezed the people with traffic fines and petty arrests, to the profit of the white power structure. When protests over Michael Brown’s murder began, they were immediately met with total disrespect, with riot police in military gear, tear gas and rubber bullets, sonic cannons, and continual escalation.

New York police union leader Patrick J. Lynch exemplifies this war spirit. After the recent protests he ghoulishly exploited the deaths of two police officers to say, “The Mayor’s hands are literally dripping with our blood because of his words, actions and policies and we have, for the first time in a number of years, become a ‘wartime’ police department. We will act accordingly.” Mayor de Blasio’s bloody offense, in Lynch’s eyes, was to admit that he had warned his biracial Black/white son about how to act in encounters with police. This conflict reflects real divisions within the ruling class.

We have now suffered a full four decades of cancerous growth of the prison industrial complex, U.S. capitalism’s racist response to its structural crisis, which has targeted mainly Blacks—including Black women—Latinos, and the poor. The warehousing of millions, their disenfranchisement as citizens, and the denial of their humanity have created a social order in which Black youth are made to live continuously suspended over an abyss of non-existence.

The discovery of gold and silver in America, the extirpation, enslavement and entombment in mines of the aboriginal population…the turning of Africa into a warren for the hunting of Black skins, signalized the rosy dawn of the era of capitalist production.

Today’s youth have fully absorbed the reality of this racist prison system and been schooled by generations of resistance to it. They see its roots deep in the development of U.S. and world capitalism, in the genocidal conquest of the Americas and the enslavement of Africans. They are very close in this regard to Marx’s development of the absolute contradictions of capitalism, close enough to give every promise of the further development of revolutionary theory and practice.

This is no mere academic question. While the development of so-called “identity politics,” hated by reactionaries, has yielded many important insights, and helped to unmask structural racism, it is by no means on the same level as the concrete struggles of California Pelican Bay prisoners who have in practice forged necessary alliances between Blacks, Latinos and whites. As one of them wrote, “At the heart of social movements is the fundamental quest to unify subjectivity and objectivity—in other words, for an individual’s thinking/feelings to be reflected in their given reality. With such a full expression of humanism society can be reconstructed on human foundations.” (Faruq, Pelican Bay Hunger Strikers: “We want to be validated as human.”)

While blank-eyed sociopaths like Wilson, Pantaleo and George Zimmerman are the template for the white supremacist mind, the absolute opposite can be found in the rich, revolutionary humanism developed through four centuries of freedom struggles, from Nat Turner, Sojourner Truth and John Brown to Martin Luther King, Ella Baker, Malcolm X and the National Welfare Rights Organization to the Pelican Bay hunger strikers.

This humanism in the spirit of Marx, Frantz Fanon and Marxist-Humanism is both entry point and touchstone for the development of revolutionary ideas today. This new movement builds on the spirit of the Arab Spring and the Occupy Wall Street movement it inspired. It parallels the humanism expressed by the Arab Spring revolutions, most significantly in Syria, as elaborated in the pages of N&L. The movements from practice have pushed theory to a higher level that can develop into a full philosophy of freedom. Who will now take responsibility for developing and articulating this? Marxism in its true form remains what it always has been, a collective creation of humanity that must be recreated anew in each generation.

News & Letters recognizes this historic moment, and we encourage the fullest political and philosophic dialogue within the movement. As Raya Dunayevskaya wrote in American Civilization on Trial: Black Masses as Vanguard (1963, 1983), the absolute challenge to our age is the concretization of Marx’s concept of “revolution in permanence.” The Black dimension is crucial to the total uprooting of existing, exploitative, racist, sexist society and the creation of new, truly human foundations.

← From Ferguson to Staten Island: The logic of racism is genocide
European racism and economic decay →
This work is licensed under a Creative Commons Attribution-ShareAlike 4.0 International License