Fascism believes it can impose its will on objective reality, and does not shrink from rewriting history both past and ongoing, even where people can check it immediately, in the service of imposing its ideology on the minds of all.

So fascistic is the Trump administration that it has repeatedly flirted with Holocaust denial, such as White House Press Secretary Sean Spicer’s denial that Hitler used chemical weapons on “his own people.” That is only one aspect of the extremity of alienation’s retaliation against thought trying to break its bonds. Truth itself is under fire. That includes science in a way that recalls the heyday of Hitler and Stalin.

Not only have the administration and Congress declared war against funding for climate research and harassed climate scientists, they are erasing data.1See “I am an Arctic researcher. Donald Trump is deleting my citations,” by Victoria Herrmann, The Guardian, March 28, 2017. They are, however, considering funding a “red team” of agenda-driven “skeptics” that would criticize the consensus of 97% of climate scientists and fabricate alternative explanations of global warming. 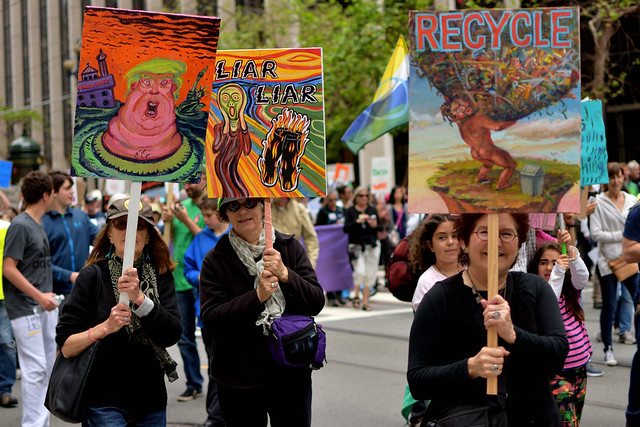 Some of the oil-company-funded climate “skeptics” were leaders of the tobacco companies’ campaign to discredit science that showed how deadly tobacco is. They are using the same approach: create uncertainty with pseudo-scientific claims countering rigorous research. Trump uses the same tactic on a broader scale, as did Hitler and Stalin to great effect: lie so outrageously and frequently that people will get confused, throw up their hands and give up trying to figure out what is true or false. This shameless “universal deception of itself and of others” is not confined to punditry and sleight of hand but is actually driving policy in both the White House and Congress to such an extent that it provoked a March for Science on Earth Day, April 22. (See “Scientists march to safeguard truth,” March-April N&L.)

The corporate press does not understand that fascism doesn’t care about facts, science, history or reasoned arguments, but rather the manipulative appeal to emotions and prejudice. A substantial part of the Republican Party has been acting that out for years, as seen in everything from mandating that textbooks falsify the history of the Civil Rights Movement to forcing doctors to lie to patients about abortions. The Texas House of Representatives even passed a bill taking $20 million away from clean air funding, giving it to “crisis pregnancy centers” that pretend to be clinics and lie to women about abortion. Resistance to this ideological assault cannot stop merely at fact-checking, which may unwittingly normalize it, or even at punching Nazis and preventing them from speaking.

What is needed is to establish a totally opposite ground, that of liberation. It is a question of grasping the transformational subjectivity inherent in objective reality, as a negative containing a positive that needs to be released—what Hegel called “the objective world whose inner ground and actual persistence is the Notion.”

Consider what Raya Dunayevskaya wrote in a different context:

“Piling up facts upon facts, ‘as such,’ is not going to make us see the direction of the absolute opposite of these counter-revolutions we have been tracing. What will make us perceive, and not only perceive but develop actions against that counter-current and for the forward movement, is the dialectical-philosophic analysis which considers facts, too, not empirically, but in the way Hegel described facts: ‘Fact emerges out of ground.’…

“If we add to this question of Fact the whole of the objective world, and see that it, too, is one-sided unless we see that objective world with its ingrained subjectivity, we will not see both what is meant about totality and how, at this critical juncture, counter-revolution is not only an outside enemy, but comes from within. There is never a simply one-to-one relationship and there is no ‘direct translation of Hegel.’ Instead, let us work out, by watching the actualities of a path to revolution, and what we projected in Philosophy and Revolution, what is at stake in the dialectics of liberation and the dialectics of organization.”2“Counter-Revolution and Revolution in Every Corner of the Globe: What Can We Do?” Aug. 30, 1975, Raya Dunayevskaya Collection, #5148, pp. 11-12.

The dialectical philosophy of revolution in permanence is needed to counter the ideologies of Right and Left that pretend to be “for” the workers—and it is the ideology of the far Right that has been making ominous strides—and to recognize the thrust of counter-revolution and hear the voices driving for freedom, to develop actions to block the former and move the latter forward, that is, to unloose the positive in the negative in both thought and activity.

Thus, while we join in the opposition to Trump and simultaneously warn about the self-limiting opposition of liberals and Democrats and their outright attempts to co-opt the militant opposition—as well as the movement-killing attempts by vanguardist parties and individuals and voluntaristic “propagandists of the deed”3“Diversity of tactics” is the favored contemporary phrase for the old anarchist “propaganda of the deed”—that is, like the Black Bloc, claiming the right to turn any protest into a stage … Continue reading to co-opt it in their own way—while we do all that, we cannot stop there.

At a time when there is a great pull to bring together what empiricists believe to be the broadest opposition by reducing everything to the lowest common denominator, we need to work at the concrete projection of a liberatory banner to act as a polarizing force for those opposed to the turn toward fascism. This points to the need for a philosophy of revolution that can become the unifying force.

The theoretical void is seen in the degenerate left ready to defend Assad but not the Syrian people’s revolution and in the way apologists for genocide have been pragmatically accepted as legitimate in coalitions against Trump. This flows from the history of normalization of state-capitalism and its administrative mentality’s pseudo-revolutionary ideology ever since Stalin’s counter-revolution passed itself off as revolution.

Continued in Part VI.  The Russian Revolution, 100 years ago and its meaning today…

← IV. International crises
VI. The Russian Revolution, 100 years ago and its meaning today →
This work is licensed under a Creative Commons Attribution-ShareAlike 4.0 International License