Mexico City—Pope Francis’s trip to Mexico drew audiences of hundreds of thousands. What was the substance of his visit?
The Pope has a partial, limited, critical view of certain transgressions of class-based industrial capitalism. He issued an important encyclical on climate change before his trip.

In celebrating mass among Indigenous people in Chiapas, speaking to youth in Morelia, addressing the question of immigrants and refugees at the border with the U.S. in Ciudad Juarez—Francis called attention to their plight, to discrimination, exclusion, poverty, the threat of drug traffickers. He was calling attention to these groups as victims.

Seeing these groups of people primarily as victims shows the limitation of the Pope’s view. Many of them see themselves, rather, as social subjects demanding social transformation. Indigenous peoples are seeking autonomy, control of their lives and lands. The Yaqui in the North, the Triqui in Oaxaca in the West, those under the umbrella of Zapatismo in the South—all refuse victimization. 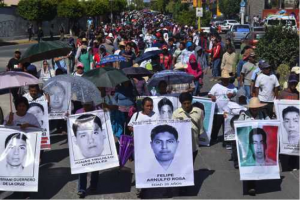 March in Mexico for the return on the 43 missing Ayotzinapa Normalista students.

Or take youth, and the activity of the Normalista rural school students. Since the disappearance and probable murder of 43 students in Ayotzinapa in 2014, they have protested, demanding answers. Yet the Pope couldn’t find the time to meet with perhaps the most active social subjects in Mexico, the mothers and fathers of the disappeared students. Was it because they don’t see themselves as victims, but have been the crucial dimension in critiquing President Peña Nieto’s failure to solve the crime? The Pope found time to see Peña Nieto, of course.

Pope Francis’s prayer at the vulgar barriers the U.S. has erected along the border to keep out refugees fleeing violence and economic deprivation was an important symbolic act. But again, does he see the refugees from Mexico and Central America, and millions more around the world, as only victims, and not as human subjects seeking dignity and self-determination?

Finally, in some areas of human rights, the Pope along with the Catholic Church as an institution is not only silent, but in opposition. The most prominent is the question of abortion, a right that has only recently and in a limited manner been recognized in Mexico. It is a right denied women in much of Latin America, where the Pope comes from. The result: vast numbers of women have died from thousands of illegal abortions. What about their human rights?