Editor’s note: The impeachment inquiry, and especially the Trump administration’s reaction to it, recalls the Watergate break-in and cover-up that led to President Richard Nixon’s 1974 resignation. It is not only that Donald Trump is bent on subordinating the whole machinery of state to his personal power and vengeance against any who dare challenge him, such as the harnessing of the Department of Justice to open a wide-ranging criminal inquiry into whoever may have helped the Robert Mueller probe into his election campaign. It is not only Trump’s repeated flagrant violation of the “phony” Constitution, the law and court orders, including continuing separation of children from their families at the border. It is also that the Republican Party has made itself his vehicle, as when Republican Representatives mobbed the impeachment hearings to disrupt them. And it is also that Democratic and Republican administrations since Reagan have steadily been reinstating Nixon’s totalitarian reach, which had been pushed back after Watergate.

Raya Dunayevskaya’s Oct. 20, 1973, “Perspectives 1973-1974” report (Raya Dunayevskaya Collection #4964), which is excerpted here, begins by analyzing the global politics of counter-revolution, and the Watergate crisis as an integral part of it. The failure of Nixon’s drive for single-party rule led to a breathing space, but only a momentary one, which put the movement to the test. The bulk of the excerpt is therefore the discussion of practicing dialectics and working out the unity of philosophy and revolution for the current moment of crisis. Footnotes were added by the editors.

The few phases of Richard Nixon’s counter-revolution that have aborted (or at least been exposed) and have given us a momentary breathing space, have been followed with Congressional and academic euphoria around the new intellectualistic Secretary of State with the mailed fist. Too many have already forgotten that it was Henry Kissinger who kept the Vietnam War going for “four more years” to extract, or rather to fool the American people that Nixon has extracted, “peace with honor”; forgotten that Kissinger had never opposed the Vietnam War—not when it began with “advisers” in the Kennedy regime, not when it became genocidal war in the Johnson years, much less during the Nixon regime. Dr. Strangelove Kissinger had always practiced “benign neglect”[1] that made sure wars would erupt in Latin America, indeed, made them erupt, be it during the Bay of Pigs (and let’s not forget those CIA agents, practiced in incompetence there, were the ones directing Watergate)[2] or the Chilean counter-revolution. 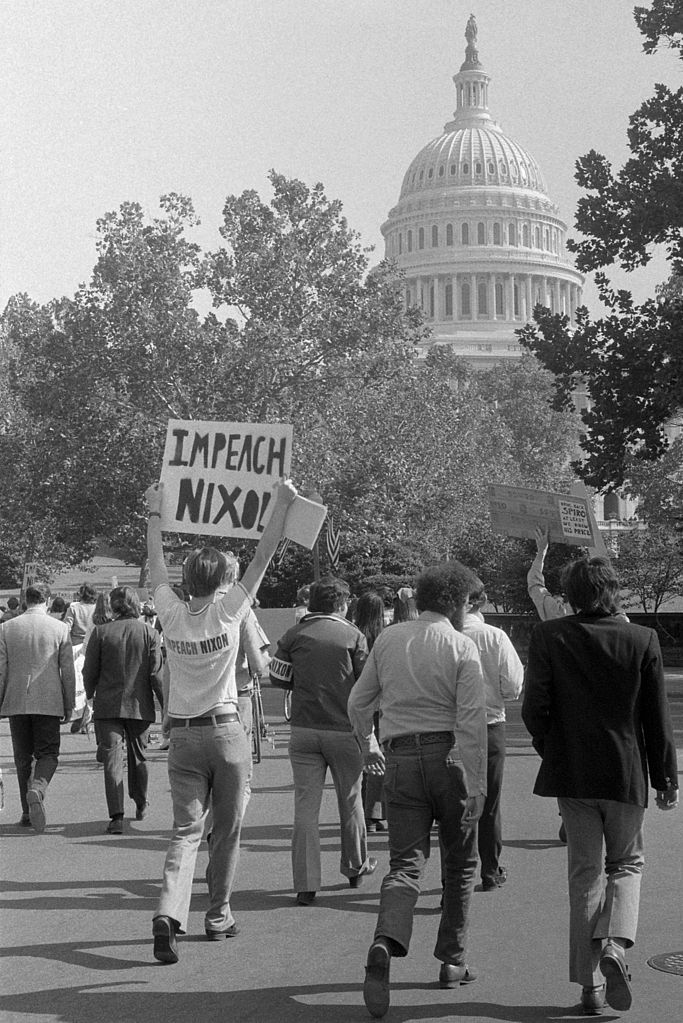 From the start (and before) [West Europe’s rulers] knew exactly what was involved for this putrid capitalistic system that had long outlived its usefulness: each had his/her 1968; each has been kept in pieces ever since despite the fact that they came out the “victors.”

Although the counter-revolution not only has all the military might and the financial resources and the state power, and despite the fatal error of the near-revolution in failing to unite the philosophic vision of liberation with its revolts, still so great was the fall of the Humpty Dumpty capitalistic system that all the superpowers in the world could not put Humpty Dumpty together again.

Put more precisely, they all knew that “the enemy” was not abroad but at home. That is, they all considered their own masses—labor, youth, Women Liberationists and, above all, minorities, Black or “immigrant” labor—all these were their “real enemy” and “therefore” they had to display their class solidarity with that foreign nuclear power they hated and envied and depended on so much: Nixonland-USA.

III. PHILOSOPHY AND REVOLUTION AS AN ONGOING PROCESS

Philosophy and Revolution as an ongoing process rather than a final result is the need of the hour, and “the hour” is an historic period—the present moving toward the future. It is actual.

The first thing we have to do to practice dialectics is to hold in hand, in mind, two opposites. Thus, we are to look not alone at the new threats that have surfaced with the counter-revolution in Chile, the Middle East war in which we support neither side, much less consider them mere coincidences severed from the world situation.

But we also must consider the absolute opposite to the counter-revolutions spurting all around us—the wildcatters that have begun a new phase in labor struggles, the youth who just toppled the military oligarchy in Thailand, the Black Dimension which, at this high stage of labor militancy, has sensed an affinity of ideas with white labor in struggle against the labor bureaucracy and with a philosophy of liberation.

And, because we are going to view them philosophically, we will also take one more look at the rulers in Nixonland and its intelligentsia. I doubt very much that Moynihan (and Kissinger, much less that idiot president, Richard Milhous Nixon) knew that the “theory” of “benign neglect” was but the lowest, most vulgar, empiric reductionism of what G.W.F. Hegel had designated as Absolute Indifference. One of the many exciting characteristics of the works of that genius Hegel is that the Absolute is not an ultimate which appears only at the end of “the system.”

Far from Hegel’s Absolutes being the ontological ultimate ascribed to them, there is an Absolute in each stage of cognition and of reality. In the Doctrine of Being, that Absolute is the lowly Absolute Indifference. What our intellectual midgets never dreamed about in thinking up “benign neglect” is that the philosophic indifference likewise has movement, the movement emerging precisely from the neglect, the negative.

Hegel warns us that Absolute Indifference cannot “attain to Essence,” but it is a transition to it. Its dialectic manifests itself when it collapses, breaks down totally. We are then compelled, if we wish to move forward, to start all over again with new beginnings, new categories, different types of measures.

Those new categories in the Doctrine of Essence—Show, Appearance, Ground, etc.—abound in the all-pervading Contradiction which keeps multiplying, deepening, until it bursts into total crisis, Actuality. Reaching for the Absolute like a bolt out of the blue, they cannot attain to Subject, become enmeshed in Absolute Substance, a high enough stage way past Indifference, the mark of anoter great philosopher, Baruch Spinoza. The merit in his philosophy, Karl Marx saw, was in his recognition that “every determination is a negation.” If you say this is, you’re also saying that is not. But it is not second negativity. Rather, it is the Great Divide Hegel marked off from all other systems as he discovered that only Subject, self-negativity, absolute negativity, can resolve contradiction.

Are the rulers merely deluding themselves that, with philosophy, they can get the “Left” to follow them? Judging by even that section of the Left that looks for philosophy but is enamored with the Frankfurt School dialecticians, there is more than a grain of truth in the delusion of Mao Zedong. Here—Frankfurt, I mean—was a School, back in 1923 when it was founded, but especially in the 1930s, who rejected Reformism and wished also independence from existing state Marxism, and who wished not to be mere academics, shouting to the skies praise of praxis. That they preferred aphorisms to Hegel’s “Absolutes” is no accident, though it would take a book to explain in full how aphorisms, like guerrilla shortcuts, are neither revolution nor philosophy. The point here is that like any sophistry, aphorisms can serve opposites, both academics and mindless activists.

So do listen to how revolutionary it can sound. The current favorite is from Adorno: “Philosophy which once seemed outmoded is now alive because the moment of its realization has been missed.”[3] The single grain of truth in this statement—we surely haven’t “realized” philosophy in the Marxian sense of achieved total freedom—shouldn’t that act as spur to “realize” it, rather than make philosophy as still one other form of escapism? And doesn’t it call for the other truth Marx singled out, that the bourgeoisie and its intellectual prizefighters could not realize it since bourgeois consciousness was false consciousness, mere ideology rather than a total outlook, a philosophy of liberation?

Translated into action, or, more precisely put, unified with action, shouldn’t that compel resistance both to Stalinist “peaceful co-existence” (that, in the concrete, today, also envelops Mao’s China) and Che-type guerrilla warfare as if that hadn’t also failed? Why not, instead, go, for once, back to Marx and work out for this age the unity of philosophy and revolution, theory and practice, and not via any pseudo-socialist parliamentarism?

I’d hate to have to count how many pamphlets will now be written on the “dialectics of revolution,” all offering new blueprints for new “strategies,” none of which will reveal the slightest awareness of the Marxian dialectics that it is impossible to tear out, root and branch, the old decrepit society and the “new” state-capitalist one calling itself Communist unless that struggle is governed by absolute negativity—the Marxian philosophy of liberation.

If we are to practice dialectics, daily, let’s take a second look at Chapter One of Philosophy and Revolution—“Absolute Negativity as New Beginning.” The title isn’t something to be learned by rote, nor can it become mere definition, phenomenal as that in itself would be, since all, Marxists and non-Marxist alike, have always looked at absolute as ultimate, rather than as new beginning.

Still, if it were left as mere definition instead of a compelling methodology for every single new event, objective and subjective, national, international, local, organizational (whether that be organization as ourselves, or as mass activity), no direction could flow to the action in any given situation.

Let me try to put it another way. The dialectic method, that “algebra of revolution,” is not just a mathematical formula, or tool, conceptual or “strategic,” for penetrating the contradictions of reality, serious a task as that is. The very fact that Hegel employs the word, Absolute, not alone to Idea but to Methodology—the Absolute Method being the dialectic of negativity, absolute negativity—means that “new beginning’’ is a process, a becoming never a mere being; always a becoming. As we saw all the way from Absolute Indifference in the Doctrine of Being, through Actuality in the Doctrine of Essence, the “result,” the Notion inseparable from Reality, was there from the beginning but it couldn’t possibly manifest itself except through development, could become full-blown only when the objective and the subjective found unity in a subject.

To point to that is our uniqueness. It comes in with new beginnings, whether these be wildcatters and youth, Blacks and Women Liberationists, and even intellectuals who can no longer stand the oppressive reality and hunger to root out contradictions with all these new forces and passions and Reason of Revolution.

And when someone asks: “Yes, but what can we do?” is it really inconsequential when, along with pointing to the activities we are engaged in, for us to say: Yes, we also are working out a philosophy, practicing dialectics, not alone in theory but in organization, for with us it is not “the party to lead” that is the unifying force, but Marx’s philosophy?

[1]. As part of the Nixon administration, Daniel Patrick Moynihan advocated a policy of “benign neglect” toward Black America, meaning in practice a rollback of what the Cvil Rights Movement had won. Dunayevskaya saw the administration applying a similar counter-revolutionary approach across the board.

The decadent capitalistic system was willing to make Nixon, who had been so perfectly produced in its own image, the culprit of Watergate only because it was so utterly certain of the “ultimate” unconditional pardon for Nixon.

From the Raya Dunayevskaya Collection

It is by no accident that Lenin listed disorder within the capitalist class as one prerequisite to a pre-revolutionary situation. Imperative, therefore, becomes the challenge to use every second of the breather gained. Objectively and subjectively this puts the movement to the test.

← Free Sitawa Nantambu Jamaa!
Essay: Black August, from 1971 to 2011-13 →
This work is licensed under a Creative Commons Attribution-ShareAlike 4.0 International License