From the March-April 2018 issue of  News & Letters

Specters of Revolt: On the Intellect of Insurrection and Philosophy from Below, by Richard Gilman-Opalsky. London: Repeater Books, 2016. 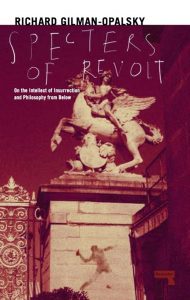 After the revolutionary 1960s did not abolish capitalism, it was evident to many that dominant forms of revolutionism had failed. Richard Gilman-Opalsky approaches the needed rethinking by vindicating both the necessity and the rationality of revolt, and viewing it as a kind of “philosophical activity from below” (p. 185). He finds wanting not only the vulgar conception of revolt as mindless violence, but sophisticated approaches to revolt as an object of analysis. He insists that the activity is itself a creative intellectual analysis carried out by subjects of revolt. The movement from below is a kind of theory, without which we will get nowhere.

Specters sketches the general “logic and content of revolt” in ten points (pp. 245-47), cautioning that the conceptual sketch cannot replace “contextual accounts of specific instances of revolt.” The points include that revolt is “a rupture with everyday life and its ideological defenses,” its politics and channels of reform, and “enacts the direct experience of autonomy and spontaneity,” thinking and acting “against the separation of theory from praxis.”

Calling for a “graveyard for orthodoxies” (pp. 192-93), Gilman-Opalsky stresses the need to be less ideological and more philosophical—less tied to preconceived ideas and more open to rigorous rethinking based on actually listening to revolt from below.

Searching for intellectual allies, Gilman-Opalsky interrogates numerous unorthodox radical writers. One such ally is Raya Dunayevskaya, founder of Marxist-Humanism. Central to Dunayevskaya’s thought is a penetrating insight into the nature of the age we live in, which she saw as characterized by a new stage of production, automation, and a new stage of cognition. In this new stage, the praxis of masses in motion for freedom is a movement from practice that is itself a form of theory, and needs to be met with a movement from theory that is a form of philosophy and revolution. To her, this insight was essential for concretizing Karl Marx’s philosophy of revolution for our age.

Gilman-Opalsky describes this concept as “a profound understanding of the intellect of revolt. [Dunayevskaya] focused on the philosophical content of what she called ‘spontaneous mass action,’ which she argued emerges as a dialectical force within and against the capitalist lifeworld….Within this milieu [of theoreticians of spontaneity], only Dunayevskaya regularly insisted upon seeing revolt as a philosophical event….Dunayevskaya articulates a distinct position that connects mass rebellion to ‘philosophic cognition’” (pp. 237-38, 241).

Let us tarry, however, at what is omitted. To Dunayevskaya, just as vital as recognizing revolt as theory was keeping that “intellect of revolt” unseparated from the self-determination of the Idea in thought as well as activity. Put differently, listening to the movement from practice and grasping it as theory is not the end of a theoretician’s responsibility. Restructuring Capital after the U.S. Civil War and the struggle for the eight-hour day, Marx profoundly recreated the dialectic that had spontaneously emerged from the self-developing subject. In so doing he created a new concept of theory, but he never thought that theory could be left up to spontaneity alone.

With many pages dedicated to exploring numerous theoreticians from Michel Foucault to Guy Debord, clearly Specters does not dismiss philosophy in books. But it suggests that philosophy from revolt greatly overshadows that in books (p. 253), so that “we do not teach social movements” but at best learn from them (pp. 195, 202). What, then, is the role of the revolutionary intellectual, of this book’s audience, of philosophy? The author is surely correct in calling for less ideology and more philosophy; does not philosophy, when it is the philosophy of revolution, cry out to be recognized as itself a force of revolution?

Gilman-Opalsky does deal a powerful blow against parties and writers who disregard the intellect of revolt; at the same time, some influential tendencies exalt spontaneity/practice and dismiss philosophy. Dunayevskaya put forward what is still crucial: the indispensability of philosophy, not party, and not only spontaneity, if humanity is to surmount the vicissitudes of revolution and counter-revolution, including counter-revolution coming from within the revolution, and find its way to the creation of a new human society.

The appropriation of only one side of Dunayevskaya’s concept of a new relationship between theory and practice is seen too in the truncation of the dialectic of negativity. Gilman-Opalsky restates the advocacy in his book Precarious Communism of a “communism that self-consciously lacks confidence about some particular, alternative future” (pp. 202-03).

Precarious communism is defined by first negation, its “total critique of capital,” and a radical uncertainty, even lack of confidence, about the negation of the negation, that is, what kind of new society is to replace this one. The reader infers that working out the second negation is left to spontaneous revolt alone. Yet what is primarily singled out from actual revolts is the “refusal,” or first negation, of the existing order (pp. 57, 162-63).

NO BLUEPRINT FOR REVOLUTION

It is true that rejecting blueprints or plans to be imposed on the movement is indispensable in our age of state-capitalism with its pervasive administrative mentality. Giving room for spontaneous revolts to self-develop and work out new goals and pathways is necessary to prevent revolutions from being transformed into opposite or stopped short.

Dunayevskaya’s development of absolute negativity as new beginning can help us not get stuck at first negation. Her concept of second negation involves a vision that is not static, nor merely an “end-state,” but develops in response to the movement from practice; that is not a blueprint and yet has enough content to act as a polarizing force.

It is not only ideologies with preconceived “alternatives to capitalism” that retard self-development of revolutionary forces. So does the lack of a unifying philosophy that can act as a polarizing force giving the movement direction, while still being open to the dialectic of thought and revolution that emerges from below. This is the lesson of the 1960s delusion that theory can be “picked up en route,” which allowed movements to be derailed from within.

Gilman-Opalsky recognizes “the revolutionary pessimism of postmodernity” (p. 164), but still hopes its cultural turn can help lead to revolution. He is optimistic enough to try to rescue Julia Kristeva from her own postmodernist permanent defeatism, summarizing her view that “the French and Russian Revolutions…started to defend themselves rather than to continually question themselves, and in this way, the revolutions came to betray revolt itself” (p. 226).

Missing from this portrayal of these revolutions as monolithic is the emergence of counter-revolution from within the revolutions—the dialectical absolute that embodies this age’s central problem, a total contradiction that calls for a total philosophy to overcome it. This absolute problem calls into question precarious communism’s overemphasis on “process not end-states” (p. 102), as if “eschatology” (p. 190) inevitably results from a robust vision of a new society such as Marx sketched in his Critique of the Gotha Program, which would transcend the division between mental and manual labor and transform labor from a mere means of life to its first necessity.

Nevertheless, Specters of Revolt remains a serious work by that rare intellectual who listens to revolt and recognizes the voice of theory in it.

One thought on “Review: Specters of Revolt”

← Uprising in Honduras
Handicap This!–March-April 2018 →
This work is licensed under a Creative Commons Attribution-ShareAlike 4.0 International License