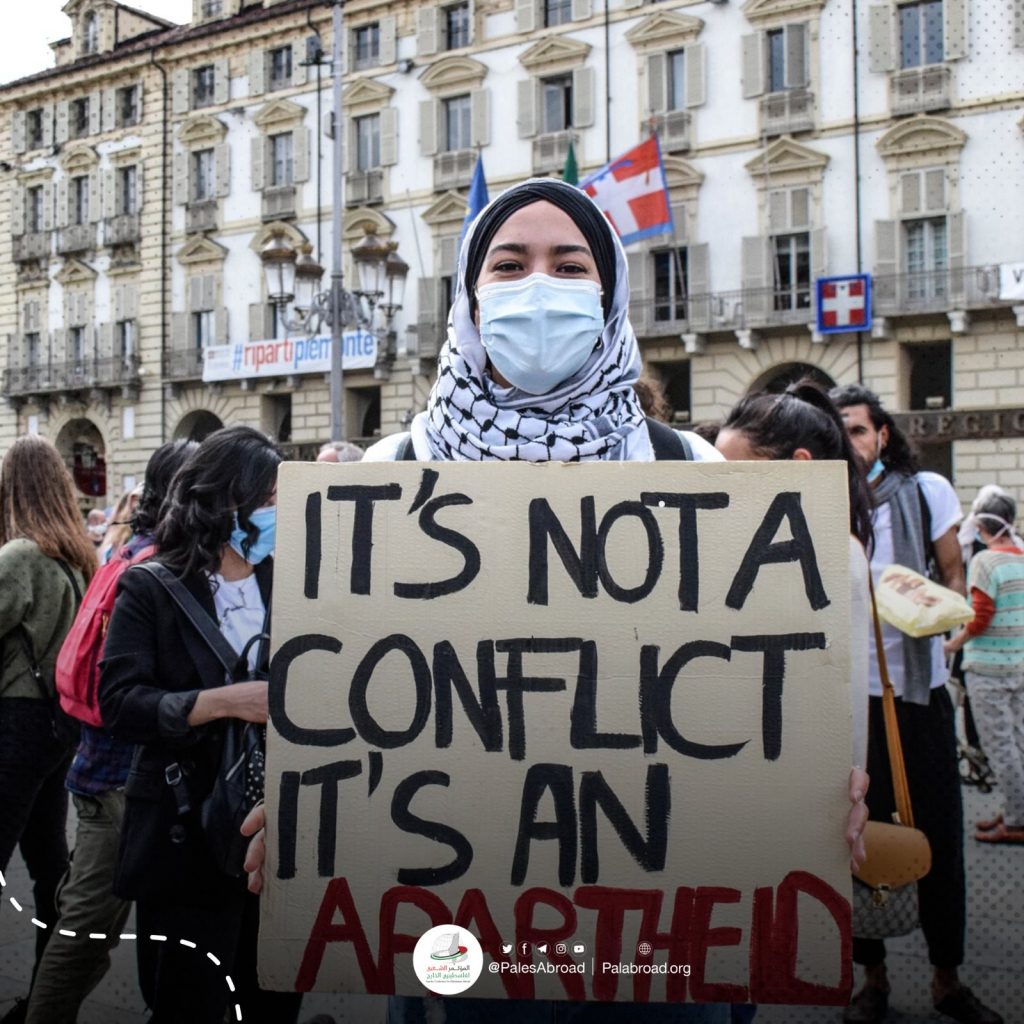 May 17, 2021, demonstration in support of Palestinians held in Turin, Italy; one of many held around the world. Photo: @PalesAbroad.

The brief, dirty war that broke out May 10-21 between the Israeli government and Hamas, the Islamist group ruling Gaza—allegedly over a housing dispute in the Sheikh Jarrah neighborhood of East Jerusalem—had many reactionary consequences.

This wasn’t just a repeat of past Gaza wars—another “mowing the lawn,” as a dehumanized Israeli military official called the recurring conflicts. It is necessary to look closely at the reactionary results as insight into the current state of the capitalist world. This starts with the three major actors, the Palestinians, Israel, and the shadowy player in the wings, Iran.

The most obvious reactionary consequences of these events fall on Palestinians and their movement for national and social liberation. The stage was set on April 29 when Palestinian Authority (PA) President Mahmoud Abbas canceled elections he had previously agreed to hold on May 22. This outraged many Palestinians, including Hamas, the reactionary group that has ruled in Gaza since 2007.

Neither of these organizations truly represents Palestinians. The PA has developed a capitalist ruling class in the West Bank that is tied to Saudi and Israeli capital, sometimes even hiring Israeli security companies to defend against its own workers.

Hamas, in contrast, gets more funding and weaponry from Iran. It has developed a somewhat smaller capitalist class, running shopping centers and other enterprises, and levying taxes on Palestinian workers.

Abbas, who was elected in 2005 for a four-year term, has refused to hold elections since then. This “coup” led Hamas, which hoped to make gains, to call for demonstrations at the Temple Mount in Jerusalem that were met by the usual heavy-handed Israeli response. Hamas used this as an excuse to launch thousands of Iran-supplied rockets in attacks against Israel. They may have imagined this would have a huge impact on regional politics. It did not. The peace accords Israel has signed with various regional powers were unaffected.

What is, perhaps, most telling is that—following the Israeli bombing and misfired Hamas rockets (about one in every five) that fell on Gaza—the Hamas leaders were forced to apologize to the Palestinian people. Sincere or not, it shows the independence of the Palestinian working class that remains the real core of the national liberation movement.

These people are not willing to enlist in battles they don’t initiate themselves.

In 2011, in the wake of the Arab Spring, protests for social and economic justice in Israel resulted in the occupation of Rothschild Boulevard. This moment saw the tentative but real possibility of unity between Israeli and Palestinian workers. It saw many Israelis beginning to question the costs of military rule of the West Bank and Gaza.

Hard as it may be to remember now, this is the power that can be unleashed when humanity rises above the suffocating dreck of capitalist rule. This chance at progress was met by some concessions, and some repression; but most relevant for today, the Israeli Right in response introduced the reactionary law declaring Israel to be “the nation-state of the Jewish people,” reserving the right of self-determination to Jewish citizens.

This controversial law, barely passed by the Knesset in 2018, was directed against any revolutionary unity between Jews and Palestinians. It is exactly that fault line that snapped on May 10, when anti-Arab riots and pogroms exploded in Lod. These spread to Haifa, Beersheba, Tiberias, Acre and Jerusalem. This ethnic violence represents an existential crisis for Israel. The revolutionary potential opened by the Arab Spring had given Israeli society the most precious of gifts—the opportunity to rethink its history in the light of a more human world in the absolute movement of becoming in Egypt, Syria, Yemen, as well as among Palestinian workers and youth.

Devastation in Gaza from Israeli bombs. A Palestinian citizen says of the scene: “Day after day we watch the bombs fall on homes where our friends and family live and buildings where our colleagues work, wondering if we’ll be next.” Photo: Fady Harona via OXFAM.

This was a tragic missed moment for Israel, as it has been for the world. The general strike waged by Palestinian workers in May in Israel, the West Bank, and Gaza is a poignant reminder of what might have been.

The new government of Prime Minister Naftali Bennett, who openly boasts of being “several degrees to the right” of former PM Benjamin Netanyahu, illustrates the decline of Israeli politics. His shaky coalition of Right, “Left,” and Islamic parties is likely to fall apart at its first crisis, with Netanyahu in waiting to return.

A wrong turn in history, as the world is learning to its sorrow, leaves one stuck between a rock and a hard place, struggling for breath.

IRAN: THE WAGES OF GENOCIDE

In 2011, in the wake of the Syrian Revolution, Hamas briefly distanced itself from Iran. It was forced to do this by the Palestinian people’s overwhelming support for the Syrian people’s struggle to overthrow the fascist Bashar al-Assad family dynasty, which was and is supported by Iran.

It is significant that the May fighting came at the moment the genocidal Iranian regime was holding talks with the Saudi regime. These talks undoubtedly touched on Saudi Arabia’s intention of whitewashing the Assad regime’s infinite crimes against the lives and dignity of Syrians, and reintroducing Assad into the Arab League.

Thus, one determining aspect of Hamas’ missile campaign was the Iranian regime’s regional imperialist ambitions. Iran not only supplied the ammunition, but also gave the green light to its use.

Iran is also anticipating negotiations with the U.S. about lifting sanctions and reinstating the nuclear deal of 2015-2017. They are hoping to be rewarded by world imperialism for Iran’s services as a premier hangman of the Arab Spring, participating in the Syrian genocide, mass murder of Iraqi protesters, and the devastation of Yemen.

It seems fitting then that Ebrahim Raisi, the president-elect of Iran, is a bloodthirsty hangman who presided over the executions of thousands of political prisoners in 1988. He not only did the deed, but is inhuman enough to have laughed about it since.

It should be noted that this election was widely boycotted by Iranian voters out of disgust with the ruling regime. Ayatollah Khamenei and the Revolutionary Guards run a corrupt, state-capitalist regime that insults and impoverishes Iranian workers, women, youth, and minorities. It is despised.

A measure of this hatred is the fact that even the most secure government facilities are subject to sabotage—including the Bushehr nuclear power plant, Natanz uranium enrichment plant, and various petrochemical facilities.

A ‘JEWISH QUESTION’ ONCE MORE?

It isn’t only in the Middle East that this latest war had reactionary consequences. The legitimate solidarity with Palestinian national liberation expressed in demonstrations across the U.S. and Europe was also marred by instances of the most disgusting anti-Semitism.

From New York to Los Angeles, there were attacks on synagogues, Jewish businesses, and randomly selected Jews. There were instances of swastika graffiti. This is only possible in a world reeling backward politically, acclimating itself to dehumanization and violence as the currency of human relations.

These words and deeds must be condemned. Not only this, but responsibility to history and revolutionary solidarity demands a serious reckoning with why they were done. Once again, silence is death.

THE RISE OF ‘EURASIAN’ CAPITALISM

It is worth asking why the peace accords between Israel, the United Arab Emirates, and other regional powers were unaffected by the May fighting. A key thing to understand is that Israeli capitalism, technology, and weaponry have been integrated into a “Eurasian” capitalist order that has arisen in this century.

Thus, Israel also has solid relations with China, Russia, and India. It has a clandestine relation to Saudi Arabia over mutual hostility to Iran. Israeli arms sales to Azerbaijan were a major factor in that country’s recent war with Armenia.

This is a new reality that most Western commentators have not understood. With all its many internal contradictions and rivalries, this “Eurasian” capitalism has become a major determinant in world capitalism. (Much of the turmoil in U.S. and European bourgeois politics can be traced to this fact.) The Israel-Palestine conflict, like Armenia and Azerbaijan, now exists within this framework.

Both the Alt-Right followers of Russian neofascist Alexander Dugin, and neo-Stalinist “Leftists” who disgraced themselves through apologetics for genocidal monsters like Serbia’s Slobodan Milosevic and Syria’s Assad, can be seen to have anticipated aspects of this new reality.

That is, they have grasped the anti-human, oppressive and violent logic of capitalism as it crushes and redefines human relations.

As against that dead end of dead thought, a new beginning must arise.

Marx himself anticipated as much in his last decade, as seen in his 1881 letter to Russian revolutionary Vera Zasulich on the possible anti-capitalist potential of the village commune. His Ethnological Notebooks and observations on Arab society were also anticipations of today. They form a bridge from Marx’s time to our own.1In Rosa Luxemburg, Women’s Liberation, and Marx’s Philosophy of Revolution (1982), Dunayevskaya demonstrated the necessity of a return to Marx’s Marxism as a totality to work out new revolutionary beginnings in the face of our changed world.

The entirety of Marx’s thought must now come alive, from the 1843 essay “On ‘The Jewish Question’”—where he first articulated the concept of revolution in permanence, full human emancipation—through his development of the law of capitalist accumulation, with its absolute inhumanity and necessary overthrow, in Capital.

Marxist-Humanists have opposed the reactionaries of Right and “Left” with this philosophy of human liberation. It is why we singled out the revolutionary implications of the struggle to defend a multi-ethnic society in Bosnia, as a humanist challenge to capitalism’s growing racism and dehumanization. It is why we singled out the significance of the Syrian Revolution as challenging the entirety of the world imperialist system.

In her 1983 Introduction to American Civilization on Trial: Black Masses as Vanguard, Raya Dunayevskaya wrote: “The Black

Sporadic attacks and reciprocal threats have continued between Hamas and the new Israeli government. As at all such imperialist fault lines, these aftershocks are also omens of worse to come. This demands urgent internationalist solidarity, attention to the real voices of revolt, and a philosophic clarity that will not compromise the needed revolutions in Palestine, Israel, Iran and the world.

See also “From the Writings of Raya Dunayevskaya: Need for a Total Uprooting: Down with the Perpetrators of the Palestinian Slaughter” from this issue of News & Letters.

← Editorial: Republicans savage democracy and history
From the Writings of Raya Dunayevskaya: Need for a Total Uprooting: Down with the Perpetrators of the Palestinian Slaughter →
This work is licensed under a Creative Commons Attribution-ShareAlike 4.0 International License