On the 100th anniversary of the Russian Revolution 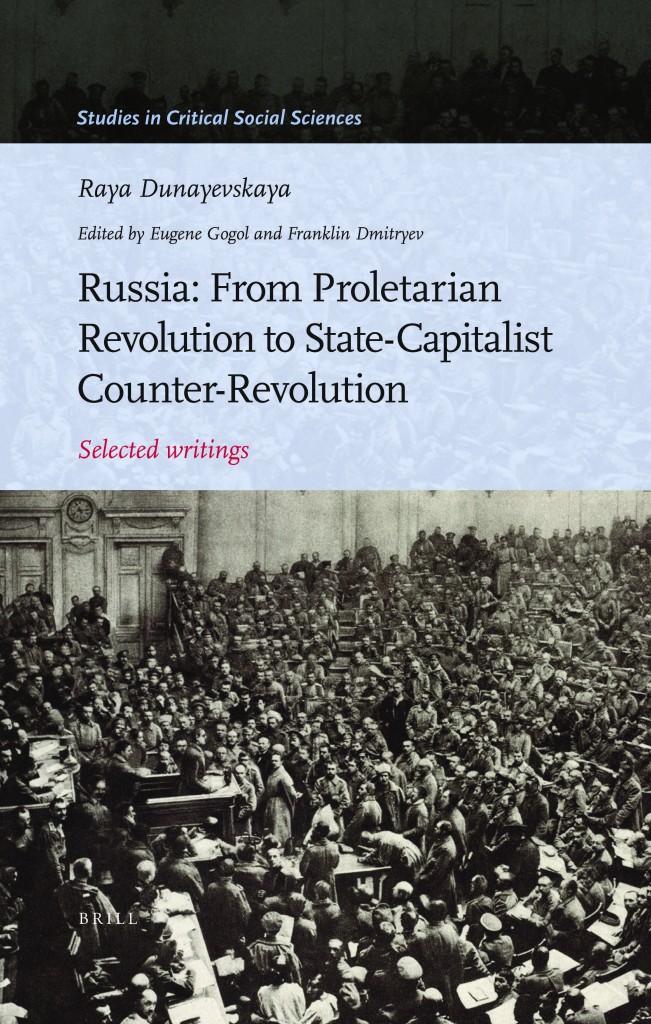 1. Translation of and Commentary on Lenin’s “Abstract of Hegel’s Science of Logic”

3. Lenin on Self-determination of Nations and on Organization After His Philosophic Notebooks

7. On Women Revolutionaries in Russia

11. The Beginning of the End of Russian Totalitarianism

15. The Cuban Revolution and What Happens After?

16. State-Capitalism as a “New Stage of World Capitalism” vs. The Humanism of Marx

The Russian Revolution’s significance as a historic event and as a link to the thought and practice of Marx has been obscured because of the abandonment of revolutionary perspectives.

Our new book collecting writings by Raya Dunayevskaya on the Russian Revolution aims to recapture for today the greatness of that event, and much more. She singled out Lenin’s philosophic break, his return to Marx’s roots in Hegel and to Hegel’s dialectic in and for itself, how Lenin extended that to a concretization of the dialectics of revolution and how that allowed the second revolution of 1917 to be.

At the same time, Lenin remained on the threshold of the absolute, his philosophic ambivalence kept hidden what should have been a beacon for the movement, and he did not extend the philosophic break to fundamentally rethinking women’s liberation and the vanguardist concept of organization he had inherited from the Second International. This did not prepare Marxists to deal with the counter-revolution that came from within the Russian Revolution. Thought is still held back by the failure to comprehend that counter-revolution from within. This has compromised attempts to resist the ideological pollution from the Right.

This new book addresses these problems, as outlined in its Introduction:

“[Dunayevskaya’s] study did not end with analyzing the revolution and the contradictory practice of the period afterwards, but continued with its transformation into its opposite, the establishment of state-capitalism, and its global impact in the 20th century. Crucial—after this first attempt to build a workers’ state was transformed into the monstrosity of a state-capitalist tyranny—was Dunayevskaya’s determination to find new beginnings for revolutionary Marxism for her age.

“Three of the categories she created were directly related to this: 1. Lenin’s philosophic preparation for revolution, as well as Lenin’s philosophic ambivalence; 2. What happens after the revolution? which referred to the first years after November 1917, and has meaning beyond the outcome of the Russian Revolution; 3. State-capitalism, the theory born in her analysis of the Russian economy using Marx’s economics from Capital, and the conditions and human relations of Russian workers at the point of production.

“Two additional categories are also crucial: 4. State-capitalism as a global phenomenon. 5. Marxist-Humanism as a philosophic-practical-organizational body of ideas that reaches back to Marx’s humanism, his philosophy of revolution in permanence, and forward to what she saw as the ongoing challenge for revolutionaries to develop further….

“Readers will find in her a thinker-activist who lived and wrote profoundly on the meaning of the Revolution and its transformation into opposite. Her questioning and passion for a world that transcends capitalism compelled her to become a Marxist philosopher who was determined to create Marxism anew….”

Ask your library to order it!

← Handicap This! September-October 2017
Now online! Guide to the Raya Dunayevskaya Collection, the Marxist-Humanist Archives →
This work is licensed under a Creative Commons Attribution-ShareAlike 4.0 International License