Editor’s note: This is the first of four essays on the topic: What is Socialism. Future essays will take up “Socialism labor and the Black dimension,” “Socialism and Ecology,” and “Socialism and women’s liberation.” The full version of Emmett’s talk can be found online, here: https://newsandletters.org/socialism-socialism-philosophy/

The world economic crisis that began in 2008 and continues today, and the contending currents of revolution and counter-revolution of the last decade—from the Arab Spring and occupation movements to the rise of fascism—have led many, especially among the young, to reach out for an oppositional concept to capitalism’s impossible reality.

We see the growth of an organization like the Democratic Socialists of America, with its internal contradictions and debates, including over how to respond to the Syrian Revolution that has been the test of world politics. Other historic trends, like Maoism, are also returning to the scene.

A QUESTION INHERENT IN REALITY

This raises the question: What is socialism? From Left to Right, this question is becoming central to political discussion. For me, it raises another question, too: What is philosophy? This is where I will begin, with the young Karl Marx.

First, he is a Hegelian—he is building on Hegel’s revolutionary dialectic of Second Negativity, the negation of the negation, as self-determination. All of world history, for Hegel, was a history of the progress and consciousness of freedom.

This is how Marx understands philosophy. He sees philosophy in terms of something new that has come into the world, the struggle of the working class—as representative of humanity—to become free.

What Hegel saw as the epochal change brought about by the French Revolution, Marx saw as being deepened by the struggle of workers.

Embedded within Hegel’s Absolute is the social individual, the human being experiencing history as humanity’s own self-development. With this insight the young Marx begins to grapple with the working-class movement for freedom, socialism. This was the foundational question in Marxism.

For Marx, socialism, or communism, or humanism (words he used fairly interchangeably) was a matter of philosophic mediation. When Marx singles out the proletariat as the revolutionary subject in 1843, it is as “a sphere which has a universal character by its universal suffering and claims no particular right because no particular wrong but wrong generally is perpetrated against it…which…is the complete loss of [humanity] and hence can win itself only through the complete re-winning of [humanity].” This includes new relations between people as well as between humanity and nature.

The quoted passage appears in his critique of Hegel’s Philosophy of Right (1843). Marx spells this out, in his 1844 Economic and Philosophic Manuscripts, as humanism, as the social individual that is the new subject of an appropriated dialectic of freedom. It isn’t only the proletariat singled out as the subject of “wrong generally” in 1844 but also woman—“the infinite degradation in which [humanity] exists for [itself]… has its unambiguous, decisive, plain and undisguised expression in the relation of man to woman.” In singling out these new subjectivities we see Marx going beyond Hegel, concretely, while building on Hegel’s revolution in philosophy.

ANTI-RACISM AND THE PROLETARIAT

The impact of the American Civil War will inspire Marx’s re-organization of volume 1 of Capital. As Hegel had already written in his Philosophy of Right: “[A] slave has an absolute right to free himself…I am entitled to the union of my potential and my actual being.” Despite real contradiction in Hegel, and his acceptance of certain racist “scientific” ideas of his time, the principle of self-determination penetrated beyond his empirical ignorance.

Anti-slavery, thus anti-racism, is fundamental to the concept of both the “proletariat” and Marx’s humanism. These relations of philosophy, subjectivity, and objective reality become central to Marx’s theory and practice, right up to his late writings on non-industrial societies and the role of women in history. His own critique of socialism is spelled out in the 1875 Critique of the Gotha Program of German socialism: it demands the end of the division between mental and manual labor, and anything less than this will fall short of real self-determination. It stamps Marx’s life’s work as a form of philosophic intervention in history.

Capital is structured very carefully. The “freely-associated labor” that strips away the commodity form is inextricable from the Absolute General Law of accumulation of capital, as well as from the “so-called ‘primitive accumulation’” of slavery and genocide. This structure is a concrete development of that “wrong generally,” that “infinite degradation” of humanity, and its transcendence. That inextricability is a philosophic projection of humanism. It is the absolute embodied in the social being.

This is socialism for Marx.

THE POST-MARX MARXIST CENTURY
The question arises again, very concretely, in the early 20th century debates over the nature of imperialism, the collapse of the Socialist International in World War I, and the dialectics of the Russian Revolution. The dialogue included names as prominent as Vladimir Lenin, Rosa Luxemburg, Leon Trotsky, Nikolai Bukharin, Karl Kautsky and Rudolf Hilferding and their varieties of socialism.

In the face of these issues, as well as anti-colonial revolts in Ireland, China, India, the Middle East and Central Asia, Lenin felt compelled to return to Hegel’s dialectic to work out practical positions on imperialism and national liberation. He realized that “none of the Marxists have understood Marx.” These questions of imperialism and national liberation became central to anti-colonial freedom movements in Africa, Asia and Latin America. They reach for philosophic expression in the work, for example, of Frantz Fanon in the 1950s and 1960s.

To be brief: in the absence of a serious re-organization of thought, and with Lenin’s own philosophic ambivalence leading him to keep his Philosophic Notebooks to himself, the Bolsheviks in power failed to negotiate the 1920s and the development of state-capitalism. Some even created a non-Marxist economic category of “primitive socialist accumulation of capital,” which would have appalled Marx with both its incoherence and its anti-humanism.

The door was opened for the world historic disaster of Stalinism with its millions of victims.

AN ATTEMPT AT MARXIST HUMANISM

What is socialism? was raised again in Eastern Europe in the post-World War II era. Then Marxist humanists like Leszek Kolakowski, Karel Kosik, and Egon Bondy made an explicit return to Marx’s philosophic writings as opposed to the alienation they experienced living under Russian Communist rule and state-capitalism. It was an attempt to reform Communism from within, which in Czechoslovakia in 1968 came to be called “socialism with a human face.”

In Hungary it saw the participation of the Petofi Circle and Georg Lukacs in the Hungarian Revolution of 1956.

This retrogression arguably became the basis around which world reaction reorganized itself. We hear its echoes everywhere today.

In general, “socialism” that only amounts to state ownership and planning will be disastrous—it is change that remains within alienation. Venezuela today would be another example. (See “Venezuela is at the crossroads”) The “Bolivarian Revolution” began with promise as the entire population voted in a new Constitution that had many good aspects, but reliance on the world market for oil (in contradiction to the Constitution’s focus on environmentalism) and a cult of “the Leader” created disaster.

THE SELF-DEVELOPMENT OF THE IDEA

The founder of Marxist-Humanism in the U.S., Raya Dunayevskaya, wrote a 1987 essay, “A Post-World War II View of Marx’s Humanism” for a Yugoslav Encyclopedia of Contemporary Socialism. She recognized the growth of reaction and counseled: “The self-development of ideas cannot take second place to the self-bringing forth of liberty, because both the movement from practice that is itself a form of theory, and the development of theory as philosophy, are more than just saying philosophy is action. There is surely one thing on which we should not try to improve on Marx—and that is trying to have a blueprint for the future.” 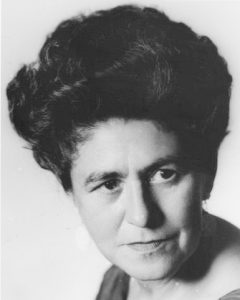 One reason I find Dunayevskaya’s Marxist-Humanism compelling is that it represents the point of connection between these two historic moments, and these two philosophic interventions—the Russian Revolution and the struggle over its meaning and direction, and the critique from within state-capitalism calling itself “socialism.”

In confronting the role a form of Eastern European Marxist humanism played in instigating the Bosnian genocide, we have learned much, I would argue, about both philosophic responsibility and the necessity for philosophic intervention in history.

Marxist-Humanists didn’t create the idea of defending a multi-ethnic Bosnia of Muslims, Serbs, Croats, Jews and Roma coexisting. What we did was make a philosophic category of that defense that still resonates—that is necessary for understanding the world. We heard that category come to life again in the revolutionary chant of “The Syrian people are one!” that opposed the fascist dictator Bashar al-Assad’s efforts to divide people along sectarian and ethnic lines, efforts that depended on the bourgeois world’s racist past and present.

I would argue that the Arab Spring revolts were in fact the most powerful challenge to the current stage of world reaction. How much bigotry was erased when workers in Madison, Wisconsin, in 2011 sought to walk like the Egyptians in Tahrir Square? This was picked up by Raed Fares and the people of Kafranbel, Syria, who made a point of continuing a dialogue with humanity through their weekly sign and slogan demonstrations, just as Marx had recognized that all revolutions reach out to “the true community, the human community.” 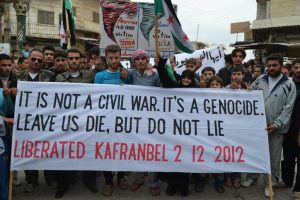 The Occupy movements in the Arab Spring’s wake were a new expression of internationalism that, unfortunately, lacked the theoretical dimension which could have built solid relations between the working classes of the U.S., Europe, the Middle East and beyond.

Too many Leftists went into Occupy with the attitude that they had to begin from square one to “educate” people in socialism. They missed the point that the masses were actually inventing something new and world-historic that was in fact nothing less than a dress rehearsal for the world revolution.

The Syrian Revolution was the turning point, and occasioned another failure to successfully define what is socialism. Few Leftists of any stripe supported that revolution—even when it was exemplary on any terms, non-violent and explicitly non-sectarian.

It was a failure to theorize what was arising from the mass movement. Syrians called for solidarity in the name of freedom, of Enlightenment, of religion, of anarchism, and of socialism. That is what Frantz Fanon termed the untidy affirmation of an absolute—how sad for the “socialist intellectual” who is cheated of his familiar language, and receives only the thing in itself: millions willing to risk all for freedom.

Without this humanist philosophic mediation, socialism is fated to remain one more form of human self-alienation.

As ever, the failure to answer the question, “What is socialism?” has horrific consequences. Those who suffer these consequences can never be allowed to become an historic elision, any more than the victims of slavery and genocide who are so poignantly remembered and recognized as absolute in Marx’s Capital.

This seems to me to be the debate over what socialism can mean today.

← Venezuela is at the crossroads
From the Writings of Raya Dunayevskaya: Women’s liberation, experimentation and revolution in permanence →
This work is licensed under a Creative Commons Attribution-ShareAlike 4.0 International License