October 30, 2019
A Marxist-Humanist analysis of the 40-day strike by the autoworkers at General Motors and its ramifications for the labor struggle in the U.S. and...
... Read more

From the Writings of Raya Dunayevskaya: Urgently needed in a time of political crisis: Philosophy and revolution as process

November 13, 2019
Recalling the Watergate break-in and cover-up that led to President Richard Nixon’s 1974 resignation, the text goes into the discussion of practicing dialectics and working...
... Read more

November 17, 2019
In the spirit of Black August Memorial, Faruq talks about the conditions of Black prisoners, the need to break race divisions between them and white...
... Read more

Voices of young and old from the Global Climate Strike 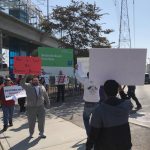 Sexism, racism and incarceration in Brazil

November 17, 2019
A report on a forum with Brazilian Black women activists in San Francisco on sexism, racism and incarceration in Brazil....
... Read more


Dangers of refineries to nearby inhabited areas. ....
... Read more

Greta Thunberg: No One Is Too Small

Voices from the inside out: Generations in jail


Robert Taliaferro takes up the high rate of incarceration in the U.S., focused on its effects on children whose parents are in prison....
... Read more
Editorial

Editorial: The Arab Spring is ongoing

November 4, 2019
Uprisings from Egypt to Iraq, Lebanon to Sudan, give the lie to the bourgeoisie’s illusions and reveal the widespread desire, shared across the region, for...
... Read more
More Articles

Page 2
Women Worldwide
Laws against abortion and sex outside of marriage in Morocco; violence against women in South Africa; Ontario’s Provincial Police will no longer release the genders of crime suspects and victims, and abortion laws in Mexico.
Illinois NOW Meets
Report on a conference by the Illinois National Organization for Women, and on the status of the Violence Against Women Act.
Detransitioners and Lesbians speak out
Report on a speech by Charlie Evans, a Detransitioner and Bisexual woman, about issues affecting specifically Lesbians and Detransitioners within the LGBTQI movement.

Page 3
CTU teachers strike!
Chicago teachers went on strike to end their terrible working conditions.
Letter from Mexico: Women fight violence
Women who demonstrated against the escalating gender violence in Mexico City are aiming for a society where being a woman would no longer mean being an object.
Hong Kong defiance
Bob McGuire describes the ongoing protests in Hong Kong, triggered five months ago against a colonialist extradition bill to mainland China.

Page 8
Save the rainforest!
Participant report on a California protest against the burning of the Amazon rainforest and the Brazilian government’s negligence.
Rebuilding our lives
A report on meeting on a re-entry program for women rebuilding their lives after prison.
A different me from 20 years ago
A prisoner thinks through how she will approach life after prison.

Page 9
‘For Sama’: video as Syrian revolt
A report on a speech by documentary filmmaker Joshka Wessels, who talks about the book “Documenting Syria.”
Queer Notes
Stabbing of a Palestinian Transgender teenager; vandalization of the Women and Children First bookstore in Chicago; a Shoreline, Wash. Christian school’s new policy stating the Bible is inerrant, and rainbow crosswalks in Ames, Iowa.

Page 10
The 5th anniversary of Ayotzinapa
In the 5th anniversary of the forced disappearance of 43 students in Mexico. Can the fight against the “corruption” of the new administration change anything fundamental?
Handicap this!
Domino’s Pizza inaccessible website; disability rights advocate Marca Bristo dies; Orange County, California, residential care homes owing over $1 million in back wages, and British rock climber Jesse Dufton leading the ascent of the Old Man of Hoy.

Page 11
Youth in Action
Youth in Action column on protests by Papuan students in Jakarta; an appeal by youth to “Save DACA in the Supreme Court now!” during the Sept. 12 presidential debate in Houston, and the national student strike for the climate on Sept. 20 in Miami Beach, Florida.

Page 12, World in View
Trump doctrine for a changed world
Trump’s Oct. 23 speech on Syria lays out his counter-revolutionary vision of a changed world including his intention to reorient the U.S.’s PYD allies in line with world capitalism.
Pacific trafficking
Gerry Emmett denounces the assassination of U.S. human rights lawyer Rachelle Bergeron and its connection with human trafficking from the Pacific to U.S.
Chile youth protests
An overview of the recent mass protests in Chile triggered by the increase in subway fares, symbolic of the growing inequality in Chilean society.