May Day is the real internationally recognized Labor Day. May Day’s very inception came out of the U.S. labor movement. In 1889 the American Federation of Labor proposed an international general strike on May 1 for the eight-hour day. Their declaration won support at the (Second) Marxist International. The struggle for the eight-hour day in the U.S. put such a stamp on the labor movement that by 1889 it became the focus of the established, non-revolutionary trade unionists of the AFL. However, the eight-hour movement had burst forth and spontaneously spread decades earlier in 1866. Then in 1867 that movement and its whole history suddenly appeared as nearly 80 pages, the chapter “The Working Day” in Capital. In concluding “The Working Day,” Marx noted that “a new life immediately arose from the death of slavery” in the American Civil War, namely, an agitation for an eight-hour day, which suddenly spread from one corner of the U.S. to the other.

SLAVERY AND THE MOVEMENT FOR AN 8-HOUR DAY

Tech workers support immigrant rights at the May Day march in San Francisco on May 1, 2017. Photo by Tech Workers Coalition.

Before going into the dramatic impact workers’ mass activity for a normal working day had on Marx, it’s important to highlight the prior international revolutionary consciousness of English workers during the American Civil War. Though it meant great self-sacrifice on their part, workers staged truly massive demonstrations in England preventing their government’s attempt to side with the cotton-supplying slavocracy of the South in the U.S. Civil War. This inspired Marx to get involved in establishing and becoming a leading voice in the first International Workingmen’s Association. Marx and the IWA supported the North critically, that is, not its constitutional goal of “saving the union” but rather the revolutionary goal of the Abolitionists and Black masses to totally uproot slavery.

When the victory over slavery unleashed the eight-hour movement in the U.S., Marx chronicled the Reason of workers in a 40-year protracted civil war in production over the normal working day during capitalism’s rise in England. That became the new section of Capital on “The Working Day.” Industrial capitalism’s inhumanly lengthy working days, including for women and children, in England had been killing off three generations of workers in one. Marx transformed his whole concept of theory, from being a debate with other theoreticians over surplus value to being an engagement with the revolutionary theory in that struggle for a normal working day.

Marx speaks well enough for himself on the revolutionary content of theory in the consciousness of workers contrasted to the whole history of revolutionary theory inherited from the 18th century revolutions, exemplified by the U.S. Declaration of Independence (1776) and the French Revolution’s Declaration of the Rights of Man (1789): “In place of the pompous catalogue of the ‘inalienable rights of man’ there steps the modern Magna Carta of the legally limited working day, which at last makes clear ‘when the time which the worker sells is ended, and when his own begins.'” In others words, when does one’s time, which Marx defined as “the place of human development,” become one’s own?

Marx certainly exposed the internally contradictory mess capitalist theorists made of “surplus value.” Marx did that by breaking up the working day into paid and unpaid hours of labor. There’s the time in which the worker creates enough value, equal to their wages or the value of all the commodities workers buy to reproduce themselves. But the worker doesn’t stop working then but continues to create value, which becomes surplus value. Thus, the longer the working day can be extended, the more surplus value, appearing as profit for the capitalist. A phantom property of commodities, their value or the socially necessary labor-time embodied in them, is the reality for capitalists which blinds them to material limits–either, says Marx, with respect to human nature or to external nature. Concerns over material limits always have to be introduced externally to save capitalism from itself. Thus, Marx personifies the worker speaking sarcastically as the embodier of the one commodity and source of new value, labor-power, in the “soulless” language of the business of commodity exchange. This became a popular leaflet, “The Workingmen’s Voice” within the struggle for a normal working day in the U.S.1The leaflet is reproduced here on page 6 of The Ontario Workman from April 18, 1872. 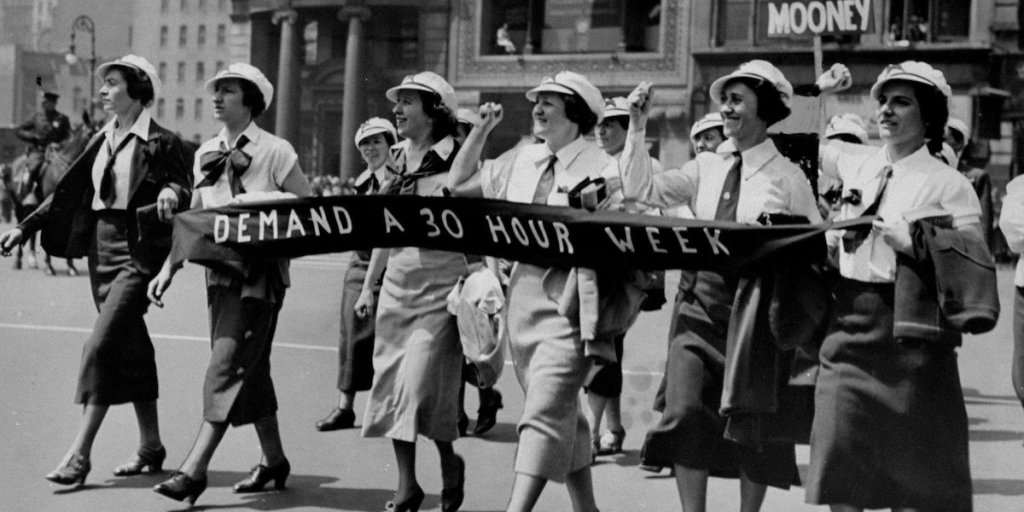 WITH CAPITALISM ALL SCIENCE GOES TO THE MACHINE TO DOMINATE WORKERS

Please read the editorial in News & Letters on Amazon workers, who, while certainly concerned about having a living wage, are primarily concerned about Amazon’s tyrannical conditions of labor, treating them like they’re “another machine.” It all begins, to quote the editorial, “from an algorithm that runs an army of robots who don’t get sick in a pandemic; who don’t complain about speed-up. The algorithm seamlessly weaves humans into the same production process, tracking their every motion on the job, constantly inching up quotas to meet the superhuman capacity of robots.” The absolute limit of the long hours and inhuman pace of work is death, which is now being documented.

A singular focus on inequality of pay, to cite the editorial’s conclusion, “betrays the limited thinking of many … who are not in the workplace where the primary concern is the dehumanization of laboring activity as all intelligence and science, as Marx once put it, goes into the machine and its algorithm while the human being is reduced to a material force. In mass strikes and wildcats, rank-and-file workers have opposed the inhumanity of capitalist automation since the beginning of its introduction in the post-WWII world. Workers’ human solidarity begins from questioning the very nature of their life activity under capitalist production, as one miner asked during the 1949-50 general strike in the mines over the introduction of a monster machine, the continuous miner, ‘what kind of labor should man do?’ Answering that demands a return to Marx’s humanism and philosophy of human activity.”

Revolutionary theory in workers keeps reappearing anew in their way of knowing, their consciousness in their activity against production relations that were killing them off at an early age through absolute surplus value or through relative surplus value and the torture of being dominated by machinery. Through her participation in the 1949-50 coal miners’ general strike, Dunayevskaya reconnected with Marx’s practice of engaging revolutionary theory coming from workers. Added to the question “when does one’s time, one’s place for human development become one’s own” in the face of an insatiable appetite for profit through absolute surplus value was a new question: “what kind of labor is appropriate for a human being” confronting a “man-killing” machine and the same appetite through relative surplus value. It’s not that Marx’s theory is the same as that which comes from workers, but that the single dialectic of the irrepressible drive to freely determine one’s life activity emerges ever anew one way to the worker and another to the theoretician.

Our age of absolutes demands that we not stop at two forms of theory–one from workers’ activity and another from theoreticians–but that the dialectic itself comes to the fore. Humanity can no longer rely on externally checking the capitalists’ sense of what is real, their sense of objectivity, which is blind to material limits either with respect to human nature or external nature. The capitalist sense of reality today has brought forth multiple total crises whether from impending ecological suicide or total destruction in an impending total war. The latter, as the 1930s showed, comes out of a general collapse in the rate of capitalist accumulation, an ensuing militarization and a turn to fascism. Marx’s unchanging universal, the single dialectic, is always open to the new, to all the “new passions and new forces” striving to freely determine their life activity and have their humanity recognized in that striving. Our times cannot rely on an eternal check on capitalism’s doomsday disregard for material limits. Our times demands a new sense of objectivity that comes from within. Such is Marx’s unchanging universal that recreates Hegel’s self-moving idea of freedom beginning from freely determined life activity that is inseparable from nature, that is, is a unity of idealism and materialism.

← Need for a Total Uprooting: Down with the Perpetrators of the Palestinian Slaughter
China’s deadly role in Myanmar must stop! →
This work is licensed under a Creative Commons Attribution-ShareAlike 4.0 International License