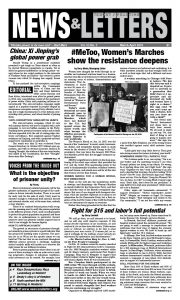 View the issue online or as pdf.

#MeToo, Women’s Marches show the resistance deepens
Women have changed the world through an incredible and sustained activism based on a humanism that runs like a revolutionary red thread through an amazing array of actions, demonstrations and statements. This development is based on over 50 years of a movement that the founder of Marxist-Humanism, Raya Dunayevskaya, characterized as “Woman as Revolutionary Force and Reason.”

Editorial: China–Xi Jinping’s global power grab
Xi Jinping’s power grab in China and within the international power vacuum are a threat to the workers of China and the world.

Editorial: Youth confront the NRA
The youth who marched on Tallahassee, Fla., and Washington, D.C., in response to the massacre of 17 students and staff at Marjory Stoneman Douglas High School on Feb. 14 in Parkland, Fla., lead the entire nation in demanding an end to gun violence.

From the Writings of Raya Dunayevskaya: Rosa Luxemburg as feminist
In celebration of International Women’s Day and Women’s History Month, we present excerpts from Dunayevskaya’s “Luxemburg as Feminist; Break with Jogiches.”

Uprising in Honduras
Protesters in Honduras consider the Nov. 26, 2017, reelection of President Juan Hernandez to be fraudulent. In the capital, Tegucigalpa, people lay down day after day to block the streets in front of the Supreme Electoral Tribunal.

Woman as Reason: Iranian women embody revolt
On Dec. 28, 2017, demonstrations broke out in the city of Mashhad, Iran, the first of many that swept across Iran for weeks. Women were a vital part of the actions, including strikes as well as protests against veiling, drawing on a long radical history.

Charles Denby’s life story: the story of the struggle for freedom
Excerpts from the introduction to the new French edition of Charles Denby’s book “Indignant Heart: A Black Worker’s Journal.”

Review: Specters of Revolt
Richard-Gilman Opalsky is a rare intellectual who recognizes revolt as a form of theory. Does his book “Specters of Revolt” grasp theory in a one-sided way and restrict the movement of negation of the negation?

Voices From the Inside Out: What is the objective of prisoner unity?
Prisoner Faruq writes of “those of us confined behind prison walls [who] recognize the pressing need to unify the prison population in the different prisons.”

World in View: Syria and International solidarity
As this is being written, Russian and Assad regime war planes continue to pound the working-class communities of East Ghouta. Every idea of human solidarity, every faith or philosophy, is being tested.

Each issue of this newspaper, like all of our literature, is meant to be the beginning of a dialogue. We look forward to hearing your thoughts on the articles you read in News & Letters, whether as comments you post on the website or otherwise.

← Handicap This!–March-April 2018
Vendors march for their rights on International Women’s Day →
This work is licensed under a Creative Commons Attribution-ShareAlike 4.0 International License